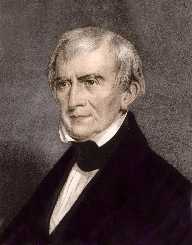 William Henry Harrison Senior was the ninth president of the United States (1841) and the first to die in office, serving just thirty-one days as president, the shortest tenure in history. At the age of 68, he was the oldest person to take the position then. He was also the last United States President to be born as an English subject, before the revolution.

William Henry Harrison Senior was born on February 9, 1773, to Benjamin Harrison V and Elizabeth Bassett Harrison. at Berkeley Plantation, the family home in Charles City County, Virginia. William was the youngest child of seven, He was born into a well-connected family who had been in Virginia since 1630s, and entirely of English descent. His father, Benjamin Harrison V was a member of the Continental Congress, and signed the Declaration of Independence.

William Harrison enjoyed home tutors before he entered Hampden–Sydney College, the Presbyterian school in Virginia. He attended the school in 1787 at the age of 14.and was a student there until 1790. In Hampden-Sydney, he studied a classical education that included Latin, Greek, French, logic, and debate.

William stopped college at his father’s demand, due to religious grounds. He then attended a boy’s school before moving to Philadelphia. In 1790, he boarded with Robert Morris, and entered University of Pennsylvania. He was studying medicine under Doctor Benjamin Rush, another co-signer of the Declaration of Independence. When Benjamin Harrison V passed away in 1791, he abandoned medical school after he found out his family’s financial situation.

Governor Henry Lee III of Virginia persuaded, William Henry Harrison to change career paths. William Harrison was commissioned as an ensign within a day, joining the First Infantry of the Regular Army. He served under Major General “Mad Anthony” Wayne,  and heading to the Northwest to fight against the Northwest Indian Confederation. They were victorious in the Battle of Fallen Timbers. William was promoted to lieutenant in 1792.

In 1793, William Harrison became Major General’s aide, where he learned military skills and was one of the signatories of the Treaty of Greenville as a witness. Under the term of the treaty, Native Americans ceded a portion of their lands to the federal government; this resulted in ? of present-day Ohio to be used as settlements by European Americans. William inherited a part of his family’s estate after the death of his mother on the same year, he sold it to his brother.

William Henry Harrison began the first phase of his political career after his military stint in 1798. William received a recommendation to replace Winthrop Sargent, the outgoing territorial secretary. He was elected by President John Adams to succeed as national secretary, and as acting provincial governor during the absence of Governor Arthur St. Clair.

William helped get legislation as the territory’s first congressional delegate, dividing the land into the Northwest and Indiana territories. He served as governor of Indiana from 1801 until 1813.

As governor, William Henry Harrison defended fledgling settlements and oversaw the efforts to gain access to and control of more Indian lands. In 1809, Tecumseh led the Indians to resist an invasion of Europeans. In 1811, William obtained permission to attack but was beaten to the chase by Tecumseh.

William Harrison’s camp was attacked on the Tippecanoe River, but they held their own despite a loss. The fight was a touchstone of Harrison’s political career. During the War of 1812, Harrison defeated the British and Indian forces and managed to kill Tecumseh at the Battle of the Thames, ending the Indian threat.

William returned to Ohio to serve in the House of Representative and Senate. He ran for presidency as a Whig in 1836, but lost to Democrat Martin Van Buren. He was successful in 1840, becoming the ninth president of the United States. He caught a cold during his inauguration, which went into full-blown pneumonia. William Henry Harrison died in the White House on April, 1841. His death sparked a brief constitutional crisis..

William Henry Harrison and Anna Tuthill Symmes eloped on November 25, 1795, as their desire to get married was rejected by her parents. Her parents, Judge John Cleve Symmes sold them land in North Bend. William was not accepted by his father-in-law until the Battle of Thames,

The couple had ten children, and Anna died on 1864 at the age of eighty eight. His grandson Benjamin Harrison was the twenty-third president of the United States, from 1869 to 1893.

William Harrison's funeral took place in the Wesley Chapel in Cincinnati, Ohio. His remains were later buried in North Bend, Ohio. The William Henry Harrison Tomb State Memorial was erected at the gravesite in his honor.

Apart from winning the Battle of Thames and keeping Indians from attacking settlements, William Harrison’s most enduring legacies are the treaties he negotiated for signed with the Native American leaders. The native tribes gave up tracts of land in the west for use as settlements.

William Henry Harrison has $1 coins minted to his likeness, and statues erected as the tribute to his work.