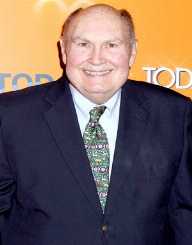 Willard Scott was born 7th March 1934, in Alexandria, Virginia, in the United States. Willard Scott studied at George Washington High School, and as a 16-year old he worked for NBC at WRC-AM radio, showing a keen interest in radio broadcasting. He then went on to study at American University. While at university, he worked at the university’s radio station, WAMU-AM for two years. He graduated with his degree in philosophy and religion.

While working at the university radio station, Willard Scott worked with another student, Ed Walker. In 1955, the pair co-hosted a radio program called Joy Boys. They aired on WRC radio which was owned by NBC. The show aired until 1972, except for a two-year period between 1956 and 1958 when Willard Scott was serving in the U.S. Navy. The 1960s proved a busy time for Willard Scott. As well as his radio show, he began hosting television programs for children. His television roles included Bozo the Clown, and Ronald McDonald.

In 1970, Willard Scott became a weatherman, and he also narrated NASA’s weekly program, The Space Story. In 1980, Willard Scott joined The Today Show as the weatherman. He continued to work through to the mid-1990s, and then he semi-retired. Over the next ten years he regularly read the weather, but when NBC took over The Weather Channel in 2009, they used the readers from that channel as substitutes instead of Scott.

Willard Scott officially announced his retirement in December 2015. He has also published several books, both fiction and non-fiction. His books include The Joy of Living and Willard Scott’s All-American Cookbook.

Willard Scott  also had the honor of being Santa Claus at several White House events.

In 1959, Willard Scott  married Mary Dwyer Scott. The couple were together until her death in 2002. They had two children together, both girls.

Willard Scott was also great friends with his radio co-host Ed Walker. Walker was blind, but it made no difference to their radio broadcasting together. Walker died in 2015, with Willard Scott saying they had been closer than many brothers were.