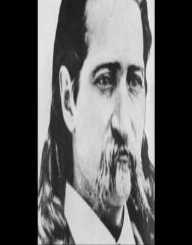 James Butler Hickok famously known as "Wild Bill" Hickok, was an American folk hero, spy, gunfighter, soldier, lawman and an actor. James told many controversial and fabricated stories about his life. These stories earned him a lot of fame and reputation.

James Butler Hickok attained the name Hickok from the ruffian lifestyle, lawlessness and vigilante activity that characterized Illinois, his birth area. When James was eighteen years, he went to Kansas and Nebraska as a fugitive. While there, James became a stagecoach driver later a lawman.

James Butler Hickok has been involved in several shootouts especially during the American Civil War where he participated as a spy for the Union Army. After the war, he gained popularity as a spy, gambler, marksman and an actor.

James Butler Hickok died in 1876 when he was shot by a disillusioned gambler, Jack McCall, as he was gambling in Deadwood, Dakota. James's legacy lives on in the literature, film and television world.

James Butler Hickok was born in Homer, Illinois on May 27, 1837. His parents were William Alonzo Hickok, a farmer and abolitionist, and Polly Butler. Butler was the fourth born child in a family of six children, and he was raised in a typical rural set-up. When James was fifteen years, his father died. Butler manifested his shooting ability as a young boy. His excellent ability to shoot earned Jame's a local title of the Marksman with a Pistol. Hickok fell out with Charles Hudson and broke into a fierce fight. They fell into a canal, and Butler feared that Hudson was dead. The fear led to Jame's fleeing from Illinois in 1855. James went to Kansas and became part of a vigilante group called General Jim Lanes ‘Free State Army

James Butler Hickok was elected as a constable in Monticello in 1858. He later joined the parent company of Pony Express, Russell, Waddell, and Majors Freight Company. In 1860, Butler was injured by an angry bear while he was a freight team from Missouri to New Mexico. Butler irritated the bear by shooting it, but he later managed to kill it.

James Butler Hickok got injured several times, He was, at one time, bedridden and he was sent to the newly established Nebraska's stagecoach stop to work as a stable during the recuperating period. On July 12, 1861, a mysterious murder took place at the Rock Creek Station office. McCanles fell out with the station manager over delayed payment; he was shot either by Butler or Wellman, the station's manager In the court of law  Butler was found to have acted in self-defense. Butler visited the McCanles' widow and apologetically offered $35, all that he had at that time, as restitution.

A civil war broke out in 1861, James Butler Hickok's vigilante nature pushed him into joining the Union Army in Sedalia, Missouri. James rapidly rose through the ranks and towards the end of 1861, he had become a wagonmaster. Butler was later discharged in unclear circumstances. James immediately joined the General James Henry Lane's Kansas Brigade.

In 1863, James Butler Hickok worked with the Provost Marshal of south-west Missouri serving as a member of the Springfield detective police. He actively spied on the irresponsible soldiers who drank liquor while on duty as well as those that owed the Union Army cash. The following year, Butler was frustrated by non-payment and moved to work as a scout with General B. Sanborn. In 1865, James moved to Springfield where he became a professional gambler. In the same year, Butler was involved in several shoot-outs. One of the shoot-outs, resulting from unpaid gambling dues, led to the death of Tutt after a fierce pistol shoot-out. Butler was charged with murder but was later acquitted.

In September 1865, James Butler Hickok finished first runners-up in an election of a city marshal of Springfield. Butler left the territory for Fort Riley, Kansas where he was appointed as a deputy Federal Marshal. During the Indian Wars, Butler served, for General George Custer's 7th Calvary, as a scout. On the same year, James set an outdoor demonstration, together with six other Indians, in Niagara Falls. The adventurous demonstration was named "The Daring Buffalo Chasers of the Plain." It was not economically rewarding as it was held outside making it difficult to ask money from people.

Controversial claims exist that James Butler Hickok hated non-natives and killed them. In 1867, Butler was involved in a shootout in Nebraska where he killed more than three people in a bar.and sustained shoulder injury. In the same year, James ran for sheriff in Ellsworth County but lost to E.W Kingsbury, a former soldier.

In December 1867, James Butler Hickok became the Deputy U.S Marshal where he took eleven Union Army defectors for trials in Topeka in the company of a sergeant, William Cody, and five privates

James Butler Hickok worked as a scout by the 10th Calvary Regiment, an African-American Unit. He was wounded while rescuing cattlemen surrounded by Indians in Bijou Creek Basin. In 1869, he was elected the Sheriff of Hays City, Kansas and killed several men in a shootout.

In 1871, James Butler Hickok was appointed as a marshal of the Tough Cow Town in Texas. James diligently worked and managed to restore normalcy in the otherwise violent region. Butler was terminated after an accidental murder of his deputy.

James Butler Hickok tried his hand in acting in the Wild West Show, but he did not perform well, he went back to West. Butler was shot dead in a gambling dispute.

James Butler Hickok was an established Sheriff in the West. He was a fierce shootout fellow whose approach on issues helped to restore order in many towns in the West.

James Butler Hickok was inducted into the Poker Hall of Fame in 1879.

On March 5, 1876, James Butler Hickok married Agnes Thatcher Lake, a proprietor in Circus, in Cheyenne. He loved gambling and even met his death in Deadwood when he was playing poker on August 2, 1876. He was buried in Ingleside Cemetery.