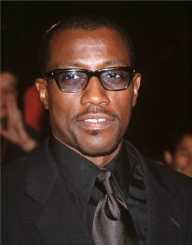 Wesley Snipes was born on July 31, 1963, in Orlando, Florida, USA. His parents are Maryann and Wesley Snipes. Snipes also has three sisters. His family later moved to New York, where he spent most of his adolescence.

As a teenager, Wesley Snipes attended the Fiorello H. LaGuardia High School of Music & Art. He later transferred to the Jones High School, where he graduated from in 1980. While at this school, he participated in some plays with the school’s drama club.

For his postsecondary education, Wesley Snipes attended the State University of New York. He later graduated from this school with a bachelor's degree in Fine Arts in 1985.

Wesley Snipes’s acting career began in the mid-1980’s when he debuted in the film Wildcats as the character Trumaine in 1986. After this, he also appeared in Streets of Gold, which was released in the same year. Other than his 1989 film, Major League, Snipes spent the rest of the 1980’s appearing as a guest star in several television shows, including Vietnam War Story, A Man Called Hawk, and The Days and Nights of Molly Dodd.

In 1990, Wesley Snipes earned his first recurring television role in the show H.E.L.P. as Officer Lou Barton. He would appear in several episodes of the show during its first season. Throughout most of the 1990’s, Snipes focused on making films instead of working on television shows. Some of the most famous movies he appeared in during this decade included King of New York, Jungle Fever, Passenger 57, Rising Sun, Drop Zone, and Blade. It was also in the late-1990’s that Snipes began working as a producer. He first produced the documentary John Henrik Clarke: A Great Mighty Walk in 1996. He then went on to produce several films, some of which he acted in: The Big Hit, Down in Delta, and Blade.

Wesley Snipes continued to work as a producer throughout the early 2000’s, but stopped producing films for the decade after 2004. Some of the films and documentaries he produced included The Art of War, Dr. Ben, Blade II, Blade: Trinity, and Undisputed. However, Snipes’s career focused mostly on his film acting. Some of the films he appeared in included Liberty Stands Still, Blade II, Undisputed, Unstoppable, and Blade: Trinity. He also appeared in an episode of The Bernie Mac Show in 2003.

As of the 2010’s, Wesley Snipes continues to work on his acting career. So far, he has appeared in the films Game of Death, Gallowwalkers, The Expendables 3, Chi-Raq, The Recall, and Armed Response. In 2015, he also had a recurring role as Mr. Johnson in the show The Player. In 2012, Snipes resumed working as a producer. He produced the documentary Revelations of the Mayans: 2012 and Beyond. In 2017, he also produced two films: The Recall and Armed Response. He also voiced the character Julius Styles in the video game Julius Styles: The International in 2011.

Over the course of his career, Wesley Snipes has won almost a dozen awards and has been nominated for a dozen others. Some of his most impressive acting awards are listed below.

In 2010, Wesley Snipes began serving his prison sentence for his unpaid taxes. From 1999 to 2001, Wesley Snipes did not file his taxes. The sentence was initially for three years in prison. He was released from prison in 2013 after serving his sentence.

Wesley Snipes was first married to April Dubois in 1985. This couple had one son together: Jelani. However, they later divorced in 1990. He then married Nakyung “Nikki” Park in 2003. Snipes has four children with Park: Akhenaten, Alaafia, Alimayu, and Iset.