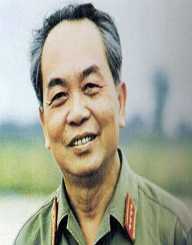 Vo Nguyen Giap was born in Quang Binh Province of French Indochina (which later became the communist state of North Vietnam). There is some confusion about his date of birth. According to some sources, his date of birth is August 25, 1911. Some other sources refer to his birth year as 1912. His father Võ Quang Nghiêm was an activist in favor of the anti-colonial movement spearheaded by the Vietnamese nationalists. French colonial authorities arrested Nghiêm on the charges of insurgent activities against their interest. He died in prison a few weeks after his arrest in 1919.

Giap was initially homeschooled by his father. He eventually joined the village school and then went to the district school. As a student, Giap was very intelligent and above average. In 1924, he moved to Hue to study in the Quoc Hoc College. Vietnamese legend Ho Chi Minh (earlier known as Nguyen Sinh Cung) had attended the same college years earlier.

EDUCATION AND INITIATION OF POLITICAL ACTIVISM

While studying at Quoc Hoc College, Giap read some writings of Ho Chi Minh. Mighty impressed and inspired by those writings he became a member of the Tan Viet Cach Menh Dang, the Revolutionary Party of Young Vietnam. He joined the party in 1926. Later, in 1930, he became a founding member of the Indochinese Communist Party. The party was the brainchild of Ho Chi Minh which he had organized in Hong Kong in the same year. In 1931, Giap joined the Communist Party of Vietnam. He attended the Indochinese University in Hanoi and studied law there from 1933 to 1938. Giap obtained a Bachelor’s degree in law with specialization in political economy from the University in 1938.

Upon receiving his law degree, Giap began his career as a history teacher at Thang Long College. A staunch supporter of anti-colonialism, he soon started to propagate the feeling of nationalism among the fellow teachers and students. Through the course of his teachings, he tried to sow the seed of nationalism among his students. He portrayed both the French colonials and the Chinese as the persecutor of the Vietnamese people both in terms of historical and contemporary viewpoint.

In 1939, French colonial authorities banned the Communist Party of Vietnam. Giap fled to China to evade arrest. However, his wife and sister-in-law could not escape. French police arrested both of them and sent them to jail. Giap’s sister-in-law lost her life under a guillotine. His wife died in prison after three years while serving life-sentence. Giap met Ho Chi Minh while in exile in China. Ho was working there as an advisor to the People’s Liberation Army. Giap learned Chinese and began to follow the strategy and technique of the Chinese Communist Party.

In the Eighth Congress of the Indochinese Communist Party, Ho Chi Minh decided to form a forum to achieve national independence of Vietnam and named it Viet Minh. Giap received the responsibilities of establishing an intelligence network and also forming and strengthening political bases in the far northern part of Vietnam. He began to publish a news-sheet for the purpose of propaganda and wrote many discourses for it. His overt verboseness in these articles was severely condemned by Ho Chi Minh.

In September 1945, Ho Chi Minh declared the independence of Vietnam after Giap entered Hanoi with all his forces the previous month. Ho made Giap the commander-in-chief of the armed forces as well as a minister for police and internal security. During the French Indochina war, Giap showed his outstanding acumen as a military strategist. On May 7, 1954, the French colonialist rule finally came to an end after Giap decisively won the battle of Dien Bien Phu.

In 1973, Giap successfully led his army to end the Vietnam War. Americans had to finally leave Vietnam as a consequence of this military success. In 1975, Americans left South Vietnam. As a result, both the North and South Vietnam were reunited. Giap served as the deputy prime minister of United Vietnam since 1976. Later, in 1980, he assumed the charge of the ministry of national defense. He remained a full member of the Politburo of the Vietnamese Communist Party. He held the post until 1982. Besides his military and political career, he has also authored a few books such as ‘A manual of guerrilla warfare’ and ‘People’s War, People’s Army’.

Giap died on October 4, 2013, at the age of 102 at Central Military Hospital in Hanoi. A state funeral was accorded to him. His mortal remains was buried in his birthplace Quang Binh.