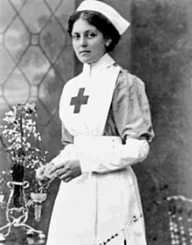 Violet Jessop was an Irish nurse and stewardess of Argentine origins who survived a number of sinking ships. Most famous of these sinking tragedies that she survived was the Titanic on April 1912.

She was born in Bahia Blanca, Argentina on October 2, 1887, as the eldest child of William and Katherine Jessop. AS the first-born, she cared a lot for her younger siblings in lieu of her busy parents. Her father died from complications during the surgery which prompted her mother to relocate the family in England when she was 16 years old. In England, she attended a convent school while caring for her siblings as her mother worked as a stewardess to provide for the family.

Eventually, her mother became ill from too much work so she had no choice but to find work to provide for the family. Like her mother, Jessop also worked as a stewardess and left school. Her first job as a stewardess was in 1908 with the Royal Mail Line at the age of 21 onboard the Orinoco. 3 years later, she started working for the RMS Olympic, the largest civilian liner during 1911. She boarded the ship on September 20, 1911, from Southampton, England when it collided with the HMS Hawke, a British warship. There were no casualties from the event and the ship managed to sail back to shore after the collision.

When she was 24, she served as a stewardess on the RMS Titanic for its maiden voyage on April 10, 1912. The luxurious cruise liner struck an iceberg four days later on April 14 causing it to sink, along with more than 1,500 passengers. Jessop was among the lucky survivors of the event, where she boarded Lifeboat 16 and was tasked by an officer to care for a baby.  Their lifeboat was saved by the RMS Carpathia a day later and the baby was grabbed by a mysterious woman, of which was assumed was the baby’s mother.

Following the event at Titanic, she resumed her work as a stewardess under the British Red Cross during World War I. She boarded the HMS Britannic of which, due to unexplained circumstances, sank on November 21, 1916, in the Aegean Sea due to an explosion. Casualties at that time amounted to 30 people out of the 1,066 individuals on board.

After the war, Jessop still continued to serve as a stewardess and even returned to work at the White Star Line and the Royal Mail Line. She also went on board the Belgenland, the Red Star Line’s largest cruise ship of which went around the world twice. Prior to her retirement, Jessop spent 42 years at sea as a stewardess.

Jessop retired in her late thirties and married for a brief period of time with no children before finally retiring in England. She spent her last days in Suffolk, England where she died at the age of 83 from congestive heart failure on May 5, 1971.