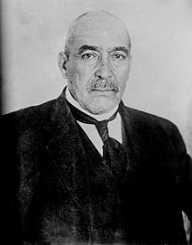 Victoriano Huerta was a Mexican military dictator who served as the 35th president of the republic.

Victoriano Huerta was born on December 22, 1850, as Jose Victoriano Huerta Marquez. He was the son of Jesus Huerta Cordoba and Maria Lazara of Colotlan in Jalisco. He grew up in poverty as most of the indigenous Mexicans. His parents were Natives of the Huichol tribe. Unable to pay for tuition, Huerta was schooled by the Catholic priest at the local parish. He was a bright student and became eloquent in Spanish and fluent in mathematics. He did various assignments earning money as a bookkeeper.

In January 1872 Huerta joined the military academy in Colotlan. He trained as regular and specialized in the field of mathematics. He was particularly fond of artillery gunnery, geographical topography, and astronomical lessons. In December 1875, Huerta was commissioned as a Second Lieutenant of the Mexican Army.

Huerta was deployed into battle while a military trainee at the academy. In November 1876, he fought for the army against the rebel forces of Porfirio Diaz. Diaz eventually won the war and overthrew the then president Sebastian Tejada.

He graduated in 1877 from the academy. He was selected to continue with specialized training in Germany. His father died and Huerta canceled the educational trip to Europe. He joined the army engineering division stationed in Pueblo and Veracruz. He was promoted to the rank of Captain in 1879. The following year, Huerta became a Major of the Mexican army.

Under the new president Diaz in 1881, Huerta was given specific engineering duties at the military geographical survey headquarters Jalapa. He headed the astronomical department and was in charge of the Mexican National Railway infrastructure survey.

In 1895, the President sent the army to quell a rebellion against the governor in the state of Guerrero. Major Victoriano Huerta was among the officers in the mission. The army pacified the rebellion in the state. Huerta emerged a formidable battlefield officer. He had a misgiving for being brutal. He killed the rebels even after they had surrendered. He impressed his boss, President Diaz. In 1900, Huerta was promoted to General of the Army.

Huerta was mandated to neutralize the Mexican Indian rebellions across the country. Despite being a Native Indian himself, Huerta led a bloody campaign against the local. He burned down villages and torched all their farms to ashes. He pacified the Mayans in Yucatan region and the Yaquis in Sonora.

The 1910 presidential elections resulted in a vicious disputation. The opposition leader Francisco Madero fled into exile in the US. He called for the overthrow of Diaz for stealing the elections. Rebel leaders in Mexico rallied their forces to overthrow Diaz. They gradually forced Diaz out of power. Huerta advised Diaz to accept defeat. Diaz went into exile in Europe.

Huerta agreed to serve under Madero in 1911, despite his liking for Diaz. Relative calm prevailed but the rebel lords continued to threaten the stability of the new administration. Madero sent Huerta to fight Zapata and Orozco. As the army engaged the two rebels in the north and south, Felix Diaz appeared on the scene. He was the nephew of exiled president Porfirio Diaz.

In a conspiracy between Diaz, Huerta and the US, Madero was besieged under a massive rebellion. Diaz was released from jail and continued to fight in the streets of Mexico City. Madero accepted the protection of his general Huerta in the presidential palace. After a fortnight of fighting in the capital, Huerta forced President Madero and his deputy out of the office on February 17, 1913.

Foreign Minister Pedro Lasurain took over power as the Mexican constitution stipulated. Huerta became the new Foreign Secretary. Lasurain abruptly resigned from power leaving Huerta as the new president. Madero and his deputy were executed on February 21, 1913, on the pretext of trying to escape house arrest.

After assuming power, Huerta disowned his allies and suspended the Mexican constitution. The former rebel leaders ganged up against Huerta. Zapata, Governor Carranza of Coahuila, Alvaro Obregon, and former Huerta companion in the army Pancho Villa all opened up battlefronts in Mexico.

Sensing a humiliating defeat, Huerta resigned on July 15, 1913. Francisco Carbajal became the new Mexican president. Huerta went into exile in the US, Britain, and Spain. Huerta planned a rebellion to recapture power while in Texas, USA. He enlisted the help of his former friend Pascual Orozco. The two were arrested for violating their asylum status and planning a rebellion. Orozco was shot as he tried to escape. Huerta was tried and jailed.

On January 13, 1916, Victoriano Huerta died in a Texas prison. Huerta was a proven military officer. He always found himself on the wrong side of the fence. He annihilated the Native Indians ruthlessly.

Huerta was a controversial figure. He served none but his own interests. He double-crossed his allies in the revolution when he became president. By assuming the dictatorial powers, Huerta managed to unite the warring rebel leaders within Mexico. He is remembered as the bloodthirsty army commander who became the 35th president of Mexico.