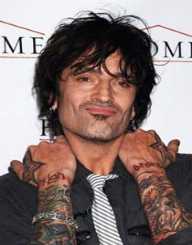 Tommy Lee was born as Thomas Lee Bass on October 3, 1962, in Athens, Greece. Born to parents David Lee Thomas Bass and Vassiliki Papadimitriou, the boy had American-Welsh parentage. He had a younger sister named Athena Lee. Within just a year of his birth, his family shifted base to California, USA.

Lee was introduced to music at the age of four when he was gifted his first set of drums. As a teenager, Tommy Lee found significant inspiration by listening to bands like ‘Led Zeppelin,’ ‘AC/DC,’ ‘Queen’ and ‘Judas Priests.’ He looked up to popular drummers like ‘John Bonham,’ ‘Peter Criss’ and ‘Terry Bozzio.’ Soon after, he quit high school to pursue a career in rock music.

In the 1970s, Tommy Lee debuted on stage in Los Angeles with the band ‘Suite 19’. During this time, Lee met Nikki Sixx, who was planning to set up a theatrical band that would specialize in heavy metal music. Lee’s drumming skills amazed Sixx, and the latter convinced the former to join his band. Lee joined Sixx’s band and took up the byname Tommy Lee.

The band first started touring with KISS and subsequently released their first single ‘Stick to Your Guns/Toast of the Town.’ The band which was slowly achieving recognition released their first album ‘Too Fast for Love’ in 1981 under their label ‘Leathür Records.’ Shortly after that, the band was signed up by Elektra Records, and their album debut was again reissued in 1982.

‘Mötley Crüe’ was becoming infamous due to their on-stage and off-stage gimmicks. Their popularity kept on soaring as they released a string of hits like ‘Shout at the Devil’ (1983), ‘Theatre of Pain’ (1985), ‘Girls, Girls, Girls’ (1987) and ‘Dr. Feelgood’ (1989). The quartet soon cemented their position as the best and most versatile metal bands of the time.

Tommy Lee, the critically acclaimed musician, was also notorious for his decadent behavior and onstage antics. In 1999, while serving a sentence in prison, T-bone left ‘Mötley Crüe’ and formed another rap metal band ‘Methods of Mayhem.’ The band released an album of the same name and did several tours before finally breaking apart.

In 2002, Tommy Lee embarked on a solo career releasing his solo album ‘Never a Dull Moment’ on May 21, 2002. The single ‘Hold Me Down’ from this album was a mainstream rock hit. After two years, Lee again did a brief stint with ‘Mötley Crüe’ and released the double-disc album ‘Red, White & Crüe.’ The album was a major hit, and a reunion tour was organized to support it named ‘The Red, White & Crüe Tour 2005: Better Live Than Dead’. In the same year, Lee published his memoir ‘Tommyland.’

Tommy Lee continued his solo career appearing in various television reality shows and making guest appearances on albums of other artists like Stuart Hamm and Rob Zombie. In 2005, he was seen in a college setting in the moderately successful television reality show ‘Tommy Lee Goes to College.’ In 2006, Lee again formed another band titled ‘Rockstar Supernova’ and the band went ahead to release a self-titled album.

In 2008, he participated in an offbeat reality show, ‘Battleground Earth’ where he competed with rapper Ludacris. In the same year, Lee again collaborated with ‘‘Mötley Crüe’’ to record their latest studio release, ‘Saints of Los Angeles.’ Since then, Lee has made appearances on several television shows and was also seen with artists dedmau5 and DJ Aero.

The heavily tattooed drummer Tommy Lee has been in the limelight mostly due to his own life. His addiction to drugs and alcohol, drama-fraught marriages leading to much-publicized arrests has always put him in the spotlight. Lee has been married thrice.

The famous American drummer first tied the nuptial knot on November 24, 1984, with model Elaine Margaret Starchuk. The marriage ended within a year, and Lee went on to marry the actress, Heather Locklear in 1986. After a turbulent phase of 7 years, the couple parted ways. In 1995, Lee met Pamela Anderson, the famous Playboy Playmate.

Within four days of the meeting, on 19th February 1995, the couple took the marital vows on a beach where Anderson made headlines by wearing a bikini to her wedding. The couple has two sons together named ‘Brandon’ and ‘Dylan.’ They divorced in 1998 and had reconciled several times since then. Lee is currently engaged to singer Sofia Toufa.

Throughout his life, Tommy Lee has been known to attract trouble wherever he goes. During his concerts, he gained notoriety for mooning the crowd. In 1995,

Lee and his wife Anderson were victims of viral pornography when their sex tape was stolen from their hotel room and released on the internet. Though initially, the couple had sued the video distribution company, they later entered into a confidential agreement that allowed the company to make the video available to its subscribers.

In 1998, Tommy Lee had to serve prison for allegedly assaulting his wife, Pamela Anderson. He also faced a lawsuit for exposing a right-faced Nazi Swastika tattoo on his arm and was also arrested on charges of instigating a riot during a concert.

In 2001, Lee was sued for negligence when a 4-year-old boy drowned in Lee’s swimming pool during his son’s birthday party. In 2007, he was kicked out from the MTV Video Awards ceremony for fighting with the artist, Kid Rock.

In the years 1986 and 1987, Lee was consecutively chosen as the ‘Best Drummer’ by Reader’s Choice Awards in ‘Metal Edge’ magazine.

Tommy Lee is also an active supporter of animal rights and is associated with PETA.