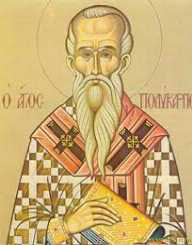 St. Polycarp was a prominent Christian figure in Roman Asia during the second century. He was probably born around 69 C.E. in Smyrna which was later renamed as Izmir in modern day Turkey. Apostle John, one of the original Disciples of Christ, ordained him as the Bishop of Smyrna. He also knew many other prominent figures of the early Christian church.

Irenaeus was one among them. He wrote about St. Polycarp in his major work in Christian theology titled ‘Adversus Haereses.’ Irenaeus was the Bishop of Lugdunum. In the passages of his book, he mentioned about Polycarp. He described how he saw and heard Polycarp’s sermons during his youth. Polycarp was also associated with the Eastern Catholic Church. Ignatius of Antioch, another prominent Christian religious personality was also an associate of the church. He also worked along with Polycarp. The Oriental Orthodox, Eastern Orthodox, Anglican, Catholic and Lutheran churches refer to him as a saint and Church Father.

The historians of the Christian world primarily knew St. Polycarp through the ‘Letter to the Philippians.’ It is his sole surviving work. The Greek scripture formed an essential basis of early Christian literature. It established the significance of Apostle Paul and the role he played in spreading Christianity among the masses. He mentioned some of the religious quotes made by Apostle Paul in this literary work. These quotes also found mention in the books of the New Testament. He established the importance of Paul as the principal authority of the Christian church by quoting him extensively in the document. He declared Paul as the cherished and esteemed figure of the Christian Orthodox Church.

Polycarp made a very significant observation in his ‘Letters to the Philippians.’ He refuted the claim of the Gnostic groups regarding God’s incarnation and the death and resurrection of Jesus Christ. According to Polycarp’s argument, all these events are a fictional phenomenon. He accorded these as only of purely moral and mythological significance.


MARTYRDOM AND THE MYTH SURROUNDING IT

St. Polycarp was executed after being arrested. He visited Bishop Anicetus of Rome to finalize the date of the Easter festival. However, unanimity about a common date eluded both of them. After some hectic deliberations, both of them mutually agreed to celebrate the festival on different dates in Rome and Asia Minor. Upon his return to his native place, the Roman authorities asked him to renounce Christianity.

The Roman proconsul arrested him after he refused to abandon Christianity. After that, they took him to the Roman amphitheater and burned him. Later, the Romans stabbed him to death. The ‘Martyrdom of Polycarp’ contains chronicles of the events surrounding his execution. The literary work is one of the earliest known examples of the Christian documents of the martyrdom genre.

There are also some myths surrounding the death of Polycarp. According to the legends, the fire lit to burn him did not touch his holy body. The executioner then stabbed him. The flow of blood caused by the wound doused the fire. He went to his heavenly abode at the age of 86.