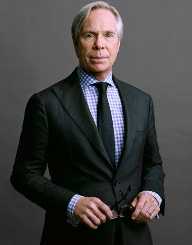 Tommy Hilfiger, one of the most popular and known fashion designers, was born on March 24, 1951, in Elmira, New York. At the time, he was the second child. However, his parents, Richard and Virginia, would go on to have seven more children. Described as being part of a family with a close Irish and Dutch-German descent, Tommy is known to have what can be described as happy upbringing. His father was a successful watchmaker while his mother was a nurse. Both parents were part of the Catholic religion and remained avid churchgoers.

For high school, Hilfiger attended Elmira Free Academy. While he did graduate, he is described as being uninvolved and non-athletic. He struggled to play football because of his small body. Additionally, as a result of dyslexia, he struggled in his studies and never rose above average.


The start of a career

It is said that a lot of Tommy Hilfiger's upbringing contributed to the career path that he took part in. As a result of his families activities, he was surrounded by themes that did just that. Two of his brothers became musicians. One of whom went into design himself. Additionally, Tommy himself would take part in at home clothing alterations to the point that he would sell them to make a profit. Overall, he has stated that the personal values in regards to work and responsibility that were instilled into him from his parents growing up are what contributed the most to his now success.

Before he finished high school, Tommy gained experience by working at a clothing store in Cape Cod. After graduating, he took his self-taught expertise and some saved up money and opened up his clothing store called People's Place. Over the next few years, the store would become a substantial success. During this phase, he also began more heavily designing the clothing himself instead of just buying and selling. The success even led to a chain of several stores being opened. It was during this time that Hilfiger realized that he would be designing clothes for the rest of his life.

Unfortunately, the economy took a hit. This hit affected Tommy Hilfiger's business significantly. In 1977, as the owner of the company, he was forced to file for bankruptcy.

While the economy did strike Tommy Hilfiger down with his first business, his time there did not come without benefits. For one, a year before he closed the stores, he had started dating Susie Carona who had been working for him. He ended up marrying her and moving to Manhattan to further pursue designing.

Following this, Hilfiger and his wife worked together in design for many different companies. He also started studying the business side of things to better his marketing skills. By this time, his name was out there and designers even such as Calvin Klein began to notice him. However, his goal was to create his brand and expand upon it.

I'm 1979, Tommy Hilfiger started a company under the name of Tommy Hill. His client list became filled, and his success was great right off the bat. He went on to create 20th Century Survival and a women's line titled Click Point.

Around the same time as the birth of his first child, Tommy accepted a position with Calvin Klein to gain some employment stability. However, not long after this, he was approached by a big-time Indian investor by the name of Mohan Murjani. Murjani was interested was a men's sportswear line and wanted Hilfiger to be the sole designer. Tommy agreed to the terms of having his name being used. This is what was the start of his brand.

In 1985, with enough financial backing and marketing from Murjani, the Tommy Hilfiger Corporation was founded. From this point on, there was the only success. The company became incorporated in 1989 under a new financial backbone, Silous Chou. It grew more rapidly with this change and within the next three years went public and introduced Hilfiger's famous menswear line.

Towards the late 1980's and early 1990's, Tommy Hilfiger started to become a competitor for the likes of Calvin Klein and such with substantial marketing fights. After being named Designer of the Year by Council of Fashion Designers of America in 1995, he started a women's line of apparel. The already growing success of his branded double, and he began opening stores in places like Beverly Hills.

Despite his successes, there were still times that got Tommy Hilfiger down for the count. In 2000, he and his wife filed for divorce. To make matters worse, his business dropped considerably. It is said that this can be blamed on the new trends of the turn of the century that caused the youth to look at different styles. This downfall caused a reanalysis of the brand. After a revamp, the company and designs all together took a decent turn for the better. Macy's offered a deal in which Hilfiger's most popular designs would be exclusive through them in 2007. He accepted.

After marrying his current wife, Dee Ocleppo, in 2008, Hilfiger's brand and personal life both continued on a positive course. Soon as the company regained a state of substantial success, it was bought by Phillips-Van Heusen in 2010 for around three billion dollars. Currently, Tommy Hilfiger is still lead designed through his company and brand and is considered to be one of the most renowned and successful designers the world has seen.

Since some of the relatively early stages of his success, Tommy Hilfiger has done several different variations of charity with and without his brand. He started the Tommy Hilfiger Corporate Foundation in 1995 that focused efforts primarily on troubled youth. He has also sponsored many different organizations relating to a variety of different causes such as ages or underprivileged children.

Tommy Hilfiger has even gone as far as to design for the Breast Health International organization. In addition to all this, Tommy, his brand, and foundation have gone to great lengths to support and promote charity. Most recently, he designed a line of clothes based on children with disabilities in conjunction with the organization known as Runaway Dreams.