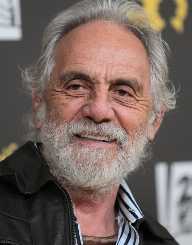 Tommy Chong was born on May 24, 1938, in Edmonton, Canada. His parents were Stanley Chong and Lorna Jean.

Tommy Chong had always known that he wanted to be famous, and he was willing to make some sacrifices to make his dreams come true. He dropped out of Crescent Heights High School when he was only 16 years old. He wanted to focus on music so he could become a famous musician (and pick up women). His guitar talents didn’t go to waste.

Tommy joined a band called Bobby Taylor & The Vancouvers (The band name had previously been both The Shades and Little Daddy & The Bachelors) It was in 1965 when he signed on with Gordy Records. With the band, he only produced one record, Does Your Mama Know About Me, before the band divided and he quit music.

In the 1960’s, Tommy Chong became good friends with a humorous man named Cheech Marin. Together, the two worked on comedy bits and even some movies. They are most famous for their comedy show, Cheech, and Chong, which aired in the early 1970’s.

The Two also starred in their movies, including Up in Smoke and Cheech and Chong’s Next Movie. The two also released numerous comedy albums together. Some of these albums are listed below.

In the mid-1980’s, Cheech Marin began to give problems in his personal life. Even his best friend, Chong, couldn’t remedy them. Cheech left the duo shortly after producing his last album with Chong, Get Out of My Room. They worked together again in 2013 to make Cheech & Chong’s Animated Movie.

After Cheech left the spotlight, Tommy Chong began to work on his own. He mostly did bit parts and cameos in movies and television shows. These roles lasted long or made him as famous as his comedy routines with Cheech did. Some of his notable television shows and movies are listed below.

Tommy Chong has won awards for his comedy albums. He earned a Grammy for Best Comedy Recording for his album, Los Cochinos. He was nominated for three other Grammys for three of his albums, Cheech and Chong, Big Bambu, and Cheech and Chong’s Wedding Album, which were all nominated in the early 1970’s.

Tommy Chong has been an advocate for marijuana use for nearly his whole life, so it did not come to a shock to many when he was caught selling bongs and other drug paraphernalia with his son, Paris, and wide, Shelby. He pleaded guilty to the charges, on the deal that he would be imprisoned, but his wife and son would not be.

He went to the Taft Correctional Institution from 2003 to 2004 to serve his sentence. He also had to pay a hefty fine. A couple of years after he had been out of jail, he released a book about his time in prison titled, The I Chong: Meditations from the Joint.

Tommy Chong was diagnosed with prostate cancer in 2012. He is currently in treatment and claims to be almost cured.