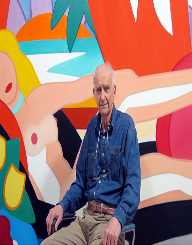 Thomas K. Wassermann was an American artist whose worse encompasses painting, sculpture, collaging and printmaker. Born on February 23, 1931, he was a leading figure in the Pop Art movement and known for his works in painting female nudes and magnified objects.

Thomas K. Wassermann was born on February 23, 1931, in Cincinnati. Raised in Cincinnati, he first received a college education at the Hiram College, Ohio in 1949, and after two years of studies transferred to the University of Cincinnati, Ohio where he majored in Psychology. His studies at the University were interrupted by service to the nation, as he was enlisted into the United States Army in 1952 for the Korean War. During his service, he developed a great interest in arts, making cartoons to kill his boredom.

This interest developed to a level that Tom Wesselmann decided to pursue it as a career. After his military service, he continued his education graduating with a degree in psychology in 1954. Wassermann later enrolled at the Art Academy of Cincinnati for his art studies. In 1956, he was accepted at IN Cooper Union in New York City to continue his studies.

His first cartoon strips were sold to 1000 Jokes and the True magazines. Some of his early inspirations were the Robert Motherwell’s “Elegy to the Spanish Republic” and works of William de Kooning but later rejected action painting. It was during a landscape-painting trip to Cooper Union's Green Camp in rural New Jersey that he realised his real passion was in painting than cartooning.

Tom Wesselmann moved to New York after his graduation. While there, he made friends Jim Dine and Marc Ratliff with whom he founded the Judson Gallery. With Ratliff, he organized a two-man exhibition at the gallery, and they exhibited some collage works. To support his livelihood, he started teaching in a public school in Brooklyn and subsequently at the High School of Art and Design.

He mostly sourced his images from discarded magazines and posters. Tom Wesselmann also made friends with the Curator, art historian, and art critic, Henry Geldzahler who further introduced him to Alex Katz and this would lead to his first solo show. Katz offered him the opportunity to exhibit at the Tanager Gallery. He displayed both large and small Great American Nude collages at the exhibition. He followed it with a one-man exhibition in the Green Gallery in 1962.

Tom Wesselmann also started the new series of still life in 1962. He began the series by experimenting with collage and assemblage. His works in this series include Still Life #28 that consists of a television set that was turned on, Still Life #59, comprising five panels that form a large, elaborate dimensional, freestanding painting and Still Life #60, 1974, which was almost 26 feet (7.9 m) long.

The next series was the Drop-Out series, which were created with the negative space around the breast in focus and later worked on the Sunset Nudes series. Tom Wesselmann also worked on the Bedroom Painting series. Some of his other works include New York City Beauty,2001, Sunset Nude with Matisse, 2002,

Tom Wesselmann married Claire Selly in 1953. The couple first met at Cooper Union as students. Selley later became his model even before they married. They have two daughters Kate and Jenny and a son Lane. His health dropped in the in the early 1990s as he suffered heart disease. He died on December 17, 2004, in New York, from complications related to his heart surgery. He published the autobiographyTom Wesselmann, in 1980 under the pseudonym Slim Stealingworth.