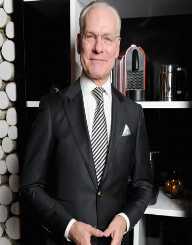 Television personality and fashion consultant Tim Gunn was born in Washington DC on the 29 July 1953 to Nancy Comfort and George Gunn. Tim Gunn grew up in a conservative family, and his father was an FB agent during the J. Edgar Hoover era. His father was a relatively controlling man and Gunn, who is gay, had a sometimes difficult upbringing because of it. He attempted to take his life at seventeen and did not talk to family members about his sexuality until he was almost thirty years old. The family lived in
Cleveland Park, a residential neighborhood in Washington D.C.

Tim Gunn was a champion swimmer at high school but was also a shy young boy who had issues with anxiety.

Tim Gunn studied at the Corcoran School of the Arts and Design, obtaining a fine arts degree in 1976

With a fine arts degree in sculpture, Tim Gunn opened a studio in his early working life. He also had a job Corcoran lecturing in design and working in the admissions department. In 1982 he joined Parson The New School for Design where he rose to become an associate dean. Between 2000 and 2007, he took control of the design programme and turned it into one of the top design programmes in the United States. In 2007, he resigned from the school and joined Liz Claiborne as a chief creative officer. Tim Gunn rose to stardom when he was offered a role in Project Runway with the Brave Television Network. The show first aired in 2004.

Project Runway turned out to be a huge success has run for fifteen seasons and spawned Tim Gunn’s Guide to Style, Lifetime’s Under the Gunn and Project Runway: Junior. He is executive producer of the show which moved to the Lifestyle Channel in 2009.

Tim Gunn has published five books. These include Tim Gunn: A Guide to Quality, Taste, and Style (2007) and Tim Gunn's Fashion Bible: The Fascinating History of Everything in Your Closet (2012).

Apart from his fashion shows, Gunn has also done voiceover in Sofia The First, and he narrated Mixology. Television shows he has appeared include Ugly Betty (2007) where he was in two episodes as a fashion reporter; Sex In The City 2 (2010), Family Guy (2013) one episode and one episode of Drop Dead Diva (2009) one episode.

In 2014 Tim Gunn won a Primetime Emmy for Outstanding Host for a Reality or Reality-Competition Program which he shared with Heidi Klum for Project Runway 2004.

He has received some nominations including a 2012 Online Film & Television nomination for Best Host or Panellist in a Non-Fiction Program for Project Runway (2004) and a 2016 PGA Award nomination for Outstanding Producer of Competition Television.

Tim Gunn is single and lives in New York City.

He wrote about growing up gay with a controlling father in Shaken, Not Stirred, a short piece available as an ebook.

Animal rights advocate Tim Gunn has used his celebrity to condemn the use of animal fur in the clothing industry. Charities he has supported include Save The Music Foundation, Joyful Heart Foundation, It Gets Better Project and the American Association of Retired Persons.