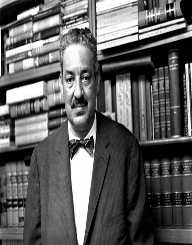 Thurgood Marshall was born on July 2nd, 1908. Later in his life, he attended Howard University where he studied law. He is to be remembered for fighting for African-Americans equality during his lifetime. He brought about a massive change in 1954 after winning the case Brown vs. Board of Education case. This brought to an end the issue of segregation witnessed in public schools. In 1967, he was allotted to the Supreme Court after which he offered his professional duties for 24 years. He died at the age of 84.

Thurgood Marshall was born on July 2nd in 1908. His place of birth was in Baltimore, Maryland. His parents were William Marshall and Noma Marshall. His great-grandfathers were born in the Democratic Republic of the Congo. They were captured and treated as slaves. His birth name was Thoroughgood. However, when he was in his second grade, he shortened it to Thurgood because he hated spelling it. His mother was a teacher whereas his father worked as a Pullman porter.

For his high school, Thurgood went to Frederick Douglass High School. He performed well in his class work and was a key member of his debate team. He was quite mischievous during his high school period, and at one time he got punished by his class teacher. As part of his punishment, he had to memorize the U.S constitution.

In 1926, Thurgood Marshall finally graduated from high school and went to Lincoln University for his higher studies. During this time, this was considered as a black’s people college in Pennsylvania. While studying at the university, he managed to enter into one of the student’s groups that had distinguished people in history today. He was joined by the likes of Langston Hughes - a famous poet, Kwame Nkrumah - Ghana’s future president and a renowned jazz singer called Cab Calloway.

Three years later, Marshall graduated from Lincoln University. After this, he wanted to join University of Maryland Law School, and therefore he applied for it. He was overqualified but he did not manage to enroll in the law school because of his race. With this kind of rejection, he opted to join Howard University which was located in Washington D.C. which was another school associated with the blacks. Later on, Marshall graduated with high honors from this university.

Immediately after advancing from law school, Thurgood Marshall began practicing law in Baltimore. However, he lacked experience, and this prevented him from landing in any cases. In 1934, he played a significant role for the National Association for the Advancement of Colored People (NAACP) branch which was located in Baltimore. He worked for this organization’s branch from Baltimore. In one of the first cases that he handled, he was arguing together with Charles Houston, his mentor. This case was Murray v. Pearson and Marshall, and his mentor won this case.

In 1936, Marshall shifted to the New York City. He had been called upon to act as one of the legal counsel of NAACP. The coming decades after this duty were a significant success for Marshall as he won some cases. Most of these cases involved bringing an end to racism. In 1940, he made his first victory in front of the Supreme Court while arguing out the case Chambers vs. Florida. Four years later he also earned a huge victory before the Supreme Court in the case, Smith vs. Allwright.

In 1954, Thurgood Marshall’s major career achievement came through. This occurred in Topeka while defending the case Brown vs. Board of Education. Winning this case in front of the Supreme Court meant that he had won 29 cases out of the 32 cases that he had presented to the Supreme Court.