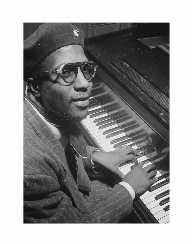 On the 10th of October 1917, Thelonious Monk was born in North Carolina as the son of Barbra and Thelonious Monk. When he was 4, his family relocated to Manhattan, in New York City, where he lived for nearly 50 years.

From an early age, Monk had a strong interest in music. He started to learn how to play piano by watching his sister practice. Monk was 6 when he started to play the piano. This interest eventually led him to pursue a degree in Theoretical Music at the Julliard School of Music.

He was at the Apollo Theatre for a series of amateur competitions. He was eventually banned from ever contesting again, at age 13, because he had won so many weekly competitions.

Monk’s passion for music led him to drop out of Stuyvesant High School, which he was attending, to instead play the piano. He joined “Texas Warhorse,” an evangelist, where he played the church organ.

In his late teens, Monk began to indulge in Jazz, playing with small, local bands. He joined the main band at Milton’s Playhouse in Harlem in 1941. It was here, where he co-created Bebop, a school of Jazz.

Thelonious Monk recorded his first music in 1944, in collaboration with the Coleman Hawkins Quartet. They were a significant influence on him and his Jazz career. As a leader for the group, Blue Note, he would record more music in the following years.

From 1947 to 1952, Monk had a few recording sessions with Blue Note. Directly after this, however, he signed to Prestige Records, and for two years, he produced some noteworthy albums under them. Almost all went unpublicized.

Monk jumped at the change to go to Europe in 1954. He performed and recorded in Paris that year. Here, he befriended Baroness Pannonica “Nica” de Koeningswarter as they were both worked with New York Jazz musicians.

He was a musical genius to critics but was yet to gain public and mainstream acclaim. To redress this, Monk released “Thelonious Monk Plays the Music of Duke Ellington” with the help of Riverside. This helped him gain some market status.

Thelonious Monk, now signed to Riverside Records, started to compose his music for the first time, notably, “Brilliant Corners” in 1956. His music’s complexity and intricacy now became clear. It often took multiple editing sessions and revisions to complete some of his compositions. This album was the beginning of his streak of commercial successes.

Monk’s cabaret card, which was revoked sometime earlier as he was found in possession of drugs, was now reinstated. He could now play in New York clubs again. He played at the Five Spot Café in 1957.

In that same year, he released his work which was regarded as almost entirely original. He was joined on the album by fellow jazz musician, John Coltrane. It was called “Monk’s Music.”

Monk had wanted to form a band, but in 1958, he took a different direction. He began a second residency at the Five Spot Café, with Griffin on tenor, Ahmed Abdul-Malik on bass, and Roy Haynes on drums forming the quartet.

After Monk and Riverside Record’s relationship got affected by conflicts over royalties, he left for Columbia Records in 1962. The next year he came out with his debut album for Columbia, “Monk’s Dream.”

Columbia Records was huge. Monk’s status as a jazz musician skyrocketed. Under Columbia, he was given enough resources to meet his creative demands. “Monk’s Dream” became a best seller by 1963

For an eight-year period spanning most of the 60’s (1962-1970), Thelonious Monk worked with Columbia Records. In this time, he released albums like “Criss Cross” (1963), “Underground” (1967) and “Monk’s Blues” (1968) to more publicity than previously. These were his best years as a recording artist. However, his output remained stifled, and his compositions grew noticeably repetitive.

After the critical and commercial acclaim of his 1963 album, “Monk’s dream” under Columbia, he was truly cemented into the tapestries of Jazz legends. He was regarded as one of an extremely exclusive group of Jazz musicians that have been featured on Time Magazine’s cover.

To this day, Thelonious Monk is considered one of the foremost authorities in Jazz and has been awarded numerous awards. All of the accolades were in celebration of his achievements as a Jazz artist and as a man of music.

His enormous stature in American Jazz music was honored in 1993 after his death, age 76; when he was awarded the Grammy Lifetime Achievement Award, highlighting his consistent propagation of the genre and music as a whole. Accolades continued to pour in, and in 2006 he was awarded a Pulitzer Prize of Special Citation.

“Thelonious Monk: Straight, No Chaser,” was released in 1988. It touched extensively on his later years and Mental Illness. His state of being is revealed in the movie. He would close himself off for days at a time, and then get excited for a few days, only to slump back into silence; according to his son.

“Straight, No Chaser: The Life and Genius of Thelonious Monk” was a biography released in 1997. This highlighted numerable mental diseases he suffered from, and how some were left untreated by his psychiatrists. He is said to have suffered from manic depression, bipolar disorder, and possible schizophrenia.

Thelonious Monk’s mental health began to deteriorate in the 60’s, during his time with Columbia, and the 70’s. He slowly developed into a recluse, with prescription drugs such as antipsychotics and lithium having little to no effect.

For his last six years, he relocated to Weehawken, New Jersey to stay with his lifelong friend that he met in Paris all those years ago, Baroness Pannonica de Koenigswarter. Here, he died of a stroke on February 17, 1982. He was buried in his home of 50 years, New York.