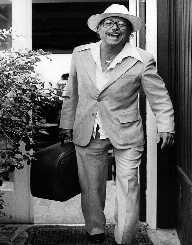 American playwright Thomas Lanier Williams III was born on March 26, 1911, in Columbus, Mississippi. Williams is of English ancestry. He was the second child of his parents three children, father Cornelius and mother, Edwina. When Williams was a child, he suffered from diphtheria and almost died. It took a whole year for him to recuperate.

Williams’ father was an alcoholic, and also quite violent. Because of his father’s drinking and bad behavior, the family had to move around a lot. When he was 16, Williams wrote an essay “Can a Good Wife Be a Good Sport?” which won him $5 in a local contest.

After finishing high school, Tennessee Williams went to study at the University of Missouri. He started to study journalism, but it felt annoying to him. To earn some extra money, Williams began to write poems, essays and also plays for local contests. His first submitted play was Beauty Is the World, which brought him some recognition. He was also a part of the University Fraternity Alpha Tau Omega but had trouble fitting in with the crowd. Other members saw him as a silent and socially awkward person.

When Williams was 21 years old, he failed a military training course in the university. After this, his father pulled him out of school and Williams started to work together with his father at the International Shoe Company factory. Although Williams hated the job, he was determined to write every day. When Williams was 24, he suffered a nervous breakdown due to being overworked, unhappy and lacking any success in writing.

In 1936, he enrolled at Washington University and two years later, moved to University of Iowa, from where he graduated with Bachelor of Arts.

When Tennessee Williams left the shoe company and went to study, he had to support himself by doing various jobs. He started to do multiple positions, including working as a caretaker on a chicken farm. Williams got himself an agent - Audrey Wood. She helped him to win the Rockefeller Foundation award for $1,000 for his play Battle of Angels. It was also later produced in Boston, but with little success.

After receiving his first big award, Williams moved to New Orleans to write for Works Progress Administration - a government organization that was first created during the Great Depression, to help struggling artists and writers. Winning the Rockefeller grant was a life-changing experience for him because this also brought the attention of the Hollywood film industry. He received a contract with Metro Goldwyn Meyer.

In 1943, Tennessee Williams’ play The Glass Menagerie was produced in Chicago. The play received good reviews and was later produced on Broadway, where it became an instant hit. The play won the New York Drama Critic’s Circle Award for the best play of the season.

Williams next plays, A Streetcar Named Desire was an enormous success. It was released in 1947 and automatically secured his reputation as one of the top playwrights of the time. Williams was still concerned that he would not be able to reproduce his success. Although wealthy at the time, he was always full of fear and insecurity to lose his wealth.

He continued to write, and in the next ten years from 1948, seven of his plays were produced on Broadway. During this time, he won two Pulitzer Prizes, as well as three New York Drama Critic’s Circle awards and Tony Award. His first two Broadway plays were also adapted into motion pictures. Six more of his matches were even later adapted for the big screen.

From 1940’s until 1970’s Tennessee Williams experienced tremendous success. Sadly, his work started to suffer a lot. He was writing every day, but the quality of work was diminished by his losses, drug use, and alcoholism. Throughout the ‘70s, most of his plays were failures, and Williams started to receive a lot of negative press. His last game A House Not Meant To Stand ran for 40 performances in Chicago, and received mostly positive reviews. In 1979, Williams was introduced in the American Theater Hall of Fame.

Tennessee Williams was very close with his sister Rose, who was diagnosed with schizophrenia in her adolescence. In 1943, when her behavior worsened, a lobotomy procedure was performed on her. The system has a disastrous result, and she was institutionalized for the rest of her life.

Williams tried to be in the relationship with several women, but by the late 1930s, he accepted his homosexuality. In New York, Williams joined a gay social circle. In 1940, Williams started a relationship with Kip Kiernan - a dancer from Canada. Kiernan left him and married a woman, but only four years later he died. His next partner was a Mexican hotel clerk Pancho Rodrigues from New Mexico. They dated until 1947 but remained close friends for the rest of their lives.

Williams also spent summer of 1948 in Rome, in a company of a teenage Italian boy. He supported the boy financially and later; it was the inspiration for his first novel The Roman Spring of Mrs. Stone.

In the spring of 1949, Williams met his partner Frank Merlo. The couple was together for 14 years, until 1963. Merlo was also Williams personal assistant and took care of the household. Years along with him were the most productive for Williams. When they broke up, just shortly after, Merlo was diagnosed with lung cancer. Williams took care of him until his death in 1963.

After Merlo’s death, Williams’s problems with alcohol, drug abuse, and depression increased. He was hospitalized and committed to mental institutions several times. His doctor was treating him with injections of amphetamines. In the 1970’s, it was rumored that Tennessee Williams had a relationship with Robert Carrol - a writer in his 20’s. Carrol and Williams sister Rose were the two only people to be in his will.

Tennessee Williams was found dead in 1983 in a hotel suite in New York. He had choked to death after inhaling a plastic cap from a nasal spray.