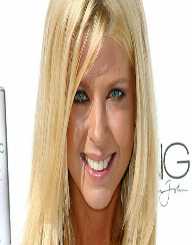 American actress Tara Reid was born on the 8 November 1975 in Wyckoff, New Jersey to Thomas Reid and Donna Bennett. She has three siblings.

Tara Reid graduated from Barnstable Academy High School. As a child, she was a pupil at the Professional Children’s School in New York.

Tara Reid was introduced to acting at a young age and appeared in various commercials as a child. She made her film debut in A Return to Salem’s Lot (1987). She also appeared in Saved By the Bell: The New Class.

In 1997 Tara Reid relocated to California. She had success with The Lebowski (1998) and appeared in various films including Urban Legend (1998), American Pie (1999), American Pie (2) and American Reunion (2012). On television she was in Scrubs, My Boss’s Daughter, Alone in the Dark (2005). She appeared in Taradise, a programme which took viewers to holiday hotspots but it was canceled after a month (2005). Tara Reid also made several direct to video films, appeared in Celebrity Big Brother 8 (2011) and music videos for Jedward. In 2013 she starred in Sharknado, and this led to four sequels and roles in other films including Tie the Knot and The Hungover Games. Recent work includes Worthless (2017), a film about bullying; and Party Bus to Hell (2017).

Apart from her acting career, Tara Reid has a clothing line, Mantra; co-owns some restaurants and has a perfume Shark by Tara.