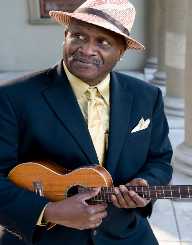 Henry Saint Clair Fredericks, better known as Taj Mahal, is a Grammy award winning blues vocalist and instrumentalist. His career spans from the mid-1960’s to the present day.

Taj Mahal was born in Harlem, New York on May 17, 1942. His father, Henry St. Clair Fredericks, was a jazz pianist and composer from Jamaica. His mother was Mildred Shields, a gospel singer, and teacher hailing from South Carolina.

At an early age, Fredericks moved to Springfield Massachusetts with his parents and sister, Carol, where he grew up. As his parents were active in music, the Fredericks home was filled with inspiration and led young Henry to master the piano, harmonica, clarinet, guitar, and bass.

Fredericks’ early influences in music, aside from his parents, included the likes of Chuck Berry and Bo Diddly.

Fredericks married the love of his life, Inshirah Geter, on January 23, 1976. Together they have six children, Aya, Taj, Gahmelah, Ahmen, Deva, and Nani.

Fredericks was well educated by his parents musically but he also achieved a degree in agriculture and animal husbandry from the University of Massachusetts in 1964. He also minored in veterinary science and agronomy.

The stage name Taj Mahal came to Fredericks from a dream he had about Mahatma Gandhi in the early 1960’s. He began using the name then and it stuck with him ever since.

While studying for his degree, Fredericks formed a band called Taj Mahal and the Electras. They played locally in Massachusetts until Fredericks finished school and moved to Los Angeles in 1964.

He quickly co-founded a local folk and blues band called Rising Sons, which featured Ry Cooder on guitar. They recorded a single with Columbia Records soon after but it was not released until 1992 because producers were not sure of the eclectic music style it showcased at the time.

He began as a traditional acoustic blues artist. Over time, Fredericks expanded his repertoire to include influences from around the world in his music. He used aspects of reggae, gospel, jazz, zydeco, R&B, Latin, West African, and Hawaiian in his music to give him unique and contemporary sounds.

His music was so unique and intertwined with so many influences that it was rejected by blues purists early on in his career for his global approach to music. In the 1990’s, his style was vindicated, asa younger generation of musicians were influenced by his worldly sound.

Fredericks’ debut solo album, Taj Mahal, came in 1968 and later became known as a classic of the 1960’s blues revival.

Together with his next two albums, The Natch’l Blues, also in 1968, and Giant Step, in 1969, the three albums gave him a reputation of being an authentic blues musician with a global appeal. In the years following, the subsequent albums released each had its own unique flavor from different parts of the world.

In 1976, Fredericks switched record labels from Columbia to Warner Brothers and in the 1980’s he relocated to Hawaii. There, he focused his music on local traditions, and in 1987 he released Taj, an album showcasing those few years of his musical exploration in the tropical state.

Fredericks did not only produce music with cultural flair. In 1988, he began the release of several children’s albums as well, and they were very successful.

Through the 1990’s, Fredericks released several albums and toured with various bands and musicians from around the world, and in 1998 formed Hula Blues Band, performing music he immersed himself in while living in Hawaii.

In 2008, Fredericks released Maestro, celebrating the 40 years he had spent in the music industry to that point, during which he released many albums.

While he remains an accomplished and acclaimed musician, Fredericks has also had other achievements in the entertainment industry. In 1972, Fredericks acted in a film called Sounders, and several years later, did it again in Sounders: Part Two. His music can be heard in both movies as he composed pieces for each. His compositions also included music in a film called Brothers, in 1977.

The stage is another medium that Fredericks has worked in. In 1991, he composed music for Broadway’s Mule Bone, which was co-written by well-known play writer, Langston Hughes.

Over the course of his career, Fredericks has been nominated for many Grammy Awards and to date, he has won five of them. His first came in 1997 for the album, Senor Blues. That was followed by another in 2000 for, Shoutin’ in Key: Taj Mahal and the Phantom Blues Band Live. Both were for Best Contemporary Blues Album. In 2008 he won for, Maestro and as recently as 2018, his album, TajMo also won for Best Contemporary Blues Album.

In 2006, he was recognized at the Blues Music Awards, receiving the Historical Album of the Year award for, The Essential Taj Mahal.

Closer to where Fredericks grew up, On February 8, 2006, he was appointed the official Blues Artist of the Commonwealth of Massachusetts.

In March of 2006, Fredericks, along with his late sister, Carole, received the Foreign Language Advocacy Award from the Northeast Conference on the Teaching of Foreign Languages. They were recognized for their tireless commitment to draw attention to the great potential of music innurturinginter cultural communication.

On May 22, 2011, Fredericks received an honorary Doctor of Humanities degree from Wofford College in Spartanburg, South Carolina.

Fredericks’ 50 plus years in music has been a remarkable story of persistence and longevity. He continues to entertain, enlighten, and educate the world with his unique brand of music.