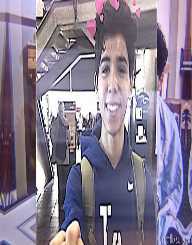 Garnering fame over social media pages have become a common thing. However, it is quite normal to come across renowned celebrities that are either of Asian or American descent. When an individual from another descent comes into the picture, he or she gains high acclaim instantly. Sulivan Gwen is one such individual. He was born in France, and he currently stands as one of the youngest uprising stars over social media. In all the social media pages that he is famous for, he has earned huge fame majorly from Instagram. His swift rise to stardom began in 2014 after he signed up for Instagram and Twitter. After becoming popular in these pages, he went ahead and signed up for other social web pages such as YouNow, YouTube, Musical.ly, and Facebook.

Socialite megastar Sulivan Gwen earned his social presence in April 2014. During this time, he signed up for the first time to Instagram. Around the same time, he also signed up with Twitter. Seeing how good he can get in these social media pages, Gwed went further and joined YouNow and later he also signed up to YouTube. These platforms have brought huge fame to his side.

In his YouTube channel alone, Gwed boasts of over 1.2 million subscribers. The username that he users for this channel is ‘unpandamoqueur’. On Instagram, he has over one million followers. With time, he has also opened up several accounts on other online pages such as Facebook and Musical.ly. All these platforms give him the opportunity of creating and uploading short videos to his account page. This is the best way of interacting with his huge number of followers.

Regardless of the fact that he had recently opened his social media accounts, by late 2016, Sulivan Gwen had thousands of followers in all his accounts. In Facebook, he has amassed over 300K likes. On YouNow, Gwen had about 70K followers. In Musical.ly, he had more than 350K fans. His Twitter account is at its peak with slightly over 400K followers.

From the look of things, Gwen's journey into being a social media megastar is just on the right track. Unfortunately, it is somewhat a daunting task to point out the exact aspects of what makes him unique from the rest. He is closely associated with Luke Korns.

Sulivan Gwed was born on July 2nd, in 2000. He was born and raised in France. Over the years, he has earned himself a huge name over social media pages. Currently, he sits as one of the most followed French youngster over several social web pages.