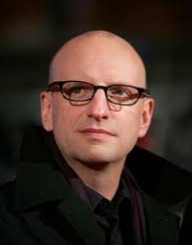 Steven Soderbergh is an American director. He is known for films including Sex, Lies, and Videotape and Erin Brockovich.

Steven Soderbergh was born on January 14, 1963, in Atlanta, Georgia.  His father Peter was a professor. His mother/s name was Mary Ann. The family moved to Baton Rouge, Louisiana for his father's job at Louisiana State University where Peter was later a dean of the College of Education.

Steven Soderbergh took a film animation class at Louisiana State University while he was still in high school at the Laboratory School. He showed interest in filmmaking early on and directed short films as part of his assignments.

After graduation, Steven Soderbergh moved to Hollywood. He did not get into the movie industry right away. His first jobs were a cardholder for a game show and a freelance editor.

Work started coming his way, including directing the 1985 concert video for the rock band Yes. He gained recognition with a Grammy nomination for Best Music Video, Long Form.

Soderbergh's film directorial debut started with a short film he also wrote called Winston. It was the inspiration for his full-length 1989 film Sex, Lies, and Videotape. It earned honours at the Cannes Film Festival including the Palme d'Or and has since been recognized as one of the greatest movies ever made by the American Film Institute.

Despite all of the accolades of his first major film on a low budget, Soderbergh struggled to match that success with his later films. His other movies and screenplays including Kafka and King of the Hill did not have the same impact.

His 1998 film Out of Sight with George Clooney and Jennifer Lopez was the beginning of his collaboration with Clooney and his climb back to success, particularly in heist and thriller movies.

In 2000, Steven Soderbergh directed Traffic and Erin Brockovich. Not only were they box-office successes, but they were both award winners in their rights.

Soderbergh not only won the Oscar for Best Director for Traffic, but he was also nominated for Erin Brockovich. It was the first time in Academy Award history that one director was nominated for two different films. This also occurred at the Directors Guild of America Awards that year.

In 2001, he directed Ocean's Eleven, the remake of the 1960s movie that starred Frank Sinatra. The new version starred Clooney as well as Brad Pitt and Matt Damon. The result was Soderbergh's highest-grossing movie.

Steven Soderbergh went on to direct the sequels Ocean's Twelve in 2004 and Ocean's Thirteen in 2007.

In 2011, he was discussing retiring after he finished his next films because he lacked his passion for the work. He had already released Contagion, and Magic Mike was released in 2012.

The only films he had left to do was the HBO biopic of Liberace in Behind the Candelabra starring Michael Douglas and Matt Damon and the remake of The Man from U.N.C.L.E. with Clooney.

Steven Soderbergh is still active in filmmaking as a director and producer. He directed films such as Unsane and TV series including The Knick and Mosaic. He recently produced Ocean's Eight with Sandra Bullock based on his Ocean's Eleven trilogies.

He is also the executive producer of the sci-fi reboot of Bill & Ted's Excellent Adventure.

Steven Soderbergh has been known to play around with filming techniques. In Full Frontal in 2001, for example, he used mostly digital video. The 2018 film Unsane was filmed using iPhones.

Steven Soderbergh was the youngest solo director to win the Palme d'Or at the Cannes Film Festival for his film Sex, Lies, and Videotape. He won one Oscar for Traffic and received a nomination for Erin Brockovich.

He was also nominated for the screenplay for  Sex, Lies, and Videotape in 1990. He was nominated for six Primetime Emmy Awards and won twice in 2013 for editing and directing Behind the Candelabra.