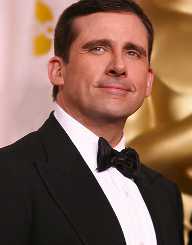 Steve Carell is well known for his comedic work on numerous TV series like “The Office” and “The Daily Show with John Stewart.” He is also best known for his role in the NBC series, the Office, as an attention starved boss. He is known for his effective use of distinctive deadpan humor. He was a TV correspondent between 199 and 2005. Then, he was not wellknown to the TV audiences as an actor. In 2005, he had his breakthrough film on the big screen. He had also had different memorable roles in Little Miss Sunshine, Anchorman and Bruce Almighty.

Steve Carell was born in Concord, Massachusetts, at Emerson Hospital on August 16, 1962. He was born to an electrical engineer, Edwin Carell, and a psychiatric nurse, Harriet T. He happened to be the youngest of his four siblings and grew up in Aton area of the region. He was raised in the Roman Catholic belief by his parents. He attended Nashoba Brooks School before going to The Fenn School and Middlesex School. He was a player of ice hockey while he was in high school as well as fife. He so much enjoyed playing fife with the other members of the family.

In 1984, Steve Carell earned his College degree from Denison University, Granville, Ohio. While he was in school, he served as a member of Burpee’s Seedy Theatrical Company. This company was a student-run improvisational comedy troupe. Although he wanted to be a lawyer, while filling out his law school application, he got to encounter a question on why he wanted to be an attorney. He did not know what to write but to contact his parents. It was then he opened up on his intention to act.

Comedy or acting entirely to Steve Carell is life. Starting from his touring children’s theater company, he performed well around with his comedy group. However, putting up his resume together to meet a strong point of becoming one of the cast members of the notable Second City Comedy Troupe was commendable. In 1991, he started going out with this Chicago troupe, Second City Comedy Troup. The same here, he debuted his film in a minor role in Curly Sue as Tesio. He started getting more prominence among the people around as time goes on. The relationship with the Second City seems to be a turning point in his life.

He was then known well as a performer as well as a writer. “The Dana Carvey Show” is one of his career builders when it appeared in 1996. There he voiced Gary of The Ambiguously Gay Duo. It was with the same troupe that he met the soon to become his wife, Nancy Walls who is also a writer and an actress. The duo got married in 1995.

The couple left for New York with Stephen Colbert, a Second City alumnus in 1999. They joined the cast of The Daily Show with Jon Stewart. This show was meant to bring out comedy from a fake news program. For five years, he played the role of the show’s correspondents. He interviewed some people. His use of deadpan humor by placing himself in absurd situations seemed to be perfect for the growing audience of the program. The audience then kept growing day in day out.

A total change was experienced in 2005 in Carell’s life. Steve Carell moved to network television where he stars in The Office, a new NBC sitcom. He was cast as Michael Scott, a sales manager for a paper supply company. The Office thus become one of the television’s most successful comedies. Carell enjoyed popularity and got some more ambitious projects. He, however, got some acting roles in some movies.

He played a role in Bruce Almighty and in its sequel Evan Almighty, where he takes the lead in 2003 and 2007 respectively. His performance was also superb as Uncle Author in Bewitched (2005). In 2005, he headlined The 40-Year-Old Virgin, a comedy film. This film was regarded as the comedy of the summer. The film grossed more than $177 million worldwide. He also played some roles in Getting Smart, where he starred as an individual who wants to become a real field agent. He successfully intercepts plans of killing the United States President.

Steve Carell is married to Nancy Walls, a student of his while teaching at Second City. The couple has two children: Elisabeth Anne and John.