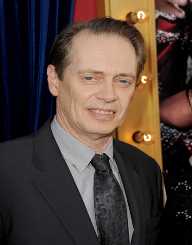 Steve Buscemi is also known for his bad-guy roles which have catapulted him into the international scene as a star. His excellent and extraordinary character portrayal is known to have made people laughed as well as cried. He is indeed a star that has worked in some movies. He is also a flag bearer of off-beat films and loves playing interesting and comical roles.

Steve Buscemi was born in Brooklyn, New York to Dorothy and John Buscemi. He was an English-Dutch Italian decent and was raised in the way of Roman Catholicism. He went to Valley Stream Central High School and graduated in 1975. He enrolled at Nassau Community College before moving to Manhattan to study theater at the Lee Strasberg Institute. He wrestled for the Varsity group as well as became a member of a drama troupe while in school he cleared civil service test in 1976 to become a firefighter in New York City with Engine Company 55’.

His career started in 1986 when he produced his film Parting Glances. He later starred in an episode of a television series Miami Vice. In 1987, he starred in Kiss Daddy Goodnight and Heart. In 1988, he starred in a follow-up of the films above with Call Me and Heart of Midnight. His early movies also include Slaves of New York as well as Tales from the Darkside. As of 1990, he had become one of the most prominent bad boys of Hollywood when he starred in Kings of New York and Miller Crossing. Steve Buscemi also appeared in two of his Spy Kids movies. He is not always bad in his movie or extremely off the wall. He could also play a romantic role as he played one Ghost World. He got a strong review for his roles in this movie as well as in The Grey Zone.

LIFE AS A DIRECTOR

It is not every time that Buscemi got on stage. Steve Buscemi also worked behind the camera to build up great movies for others. In fact, he made his first directorial effort, Trees Lounge, it got people’s attention and made a build-up of positive reviews. Steve Buscemi is also a playwright and wrote the screenplay for the film he Trees Lounge. He also had to direct one episode in The Sopranos, the critically acclaimed series.

Steve Buscemi lent his voice out to several movies which include and not limited to Monster Inc, Charlotte’s Web, G-Force, and Monsters University. He is also known to have starred in some comedy films which include I Now Pronounce You Chuck & Larry.

Steve Buscemi won numerous awards as a result of his exploits, skills, and performances.

Steve Buscemi was married to Jo Andres in 1987 and since then had no cause to divorce her. He has children from her, and the couple currently live in Brooklyn. He was arrested following the protest which shut down his previous firehouse. He also gave a speech to support higher wages for firefighters. He was also the famous Hollywood actor who voiced gingerbread men in the highly renowned AT&T Christmas Commercial.