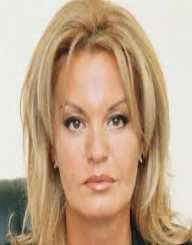 Stefka Kostadinova was born on March 25th, in 1965. She is a former athlete from Bulgaria who contested high jumps. She is a World record holder in this sport for setting a record of 2.09 meters. This record has not been surpassed since 1987. In her sports career, she emerged victorious in 1996 as she was an Olympic champion. Besides, she has been a World champion for two times and also a World indoor champion for five times. Later in her career, he took the post of Bulgarian Olympic Committee’s president. She has been serving in this post since 2005.

Stefka Kostadinova was born on March 25th, 1965. Her place of birth was in Plovdiv in Bulgaria. Right from the time she was young, she showed a strong liking for sporty activities. This contributed to her enrollment in the Plovdiv School of Sports.

Kostadinova is a World record holder to this date. She set this record while contesting at the 1987 World Championships in Athletics which were held in Rome. Here, she competed in the women’s high jump setting a World record of 2.09m. Considering the fact that she set this record during the 80s, it stands as one of the oldest in contemporary athletics. Throughout her successful long jumping career, she set a total of 7 World records. These include four indoor records and three outdoor records.

Apart from breaking such records, Kostadinova is a women’s record holder since she has managed to jump over 2 meters for 197 times. During the 1996 Summer Olympics held in Atlanta, she bagged home a gold medal. She also set another Olympic record during this competition as she jumped 2.05m. Previously, she was a silver medalist in the 1988 Summer Olympics that were hosted in Seoul.

Kostadinova was a World champion in both 1987 and 1995 as she competed in the outdoor World Championships. Between the years 1985 and 1997, she bagged home the World Indoor Championship title for five times. She is an icon in European Championships as she took home gold in all competitions she participated in.

Owing to her highly successful athletic career, Kostadinova was crowed Bulgaria’s Sportsperson in the following years 1985, 1987, 1995 and in 1996.

Stefka Kostadinova tied the knot with her coach named Nikolay Petrov. The two were blessed with their first born son in 1995. Their marriage was however not successful as they went separate ways in 1999. Still, in the same year, Kostadinova hang her career boots. Later, in 2007, she got married for the second time to Nikolai Popvasilev, a famous businessman in the construction industry.