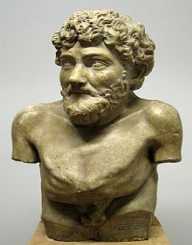 Aesop is popularly known as a legendary literary figure who is responsible for a number of stories in the form of fables which often involve a moral lesson. This Greek icon's fables have been a favorite among children and adults alike.

Not much is known from this legendary figure. A lot of people have speculated that he is a persona borne from word of mouth to establish him as a real person. He is said to be born around 620 and his name seems to have originated from a Graeco-Roman origin and it was not until the latter part of the 5th century did a person of the same name popped up in history. The Aesop from said history came from Samos, an island located in the Eastern parts of the Aegean sea.

There are no clear surviving records of the writing of this Greek icon but famed Greek figures such as Herodotus, Aristotle, and even Plutarch have mentioned this fabled author in passing.

For one, Aristotle's account indicated that Aesop was born in Thrace around 620 BCE. He was said to have come from an area near the Black Sea. Others have claimed that he was originally from Phyrgia, Callimachus, and even Lydia.

Word is that he was a slave from Samos who was owned by a Xanthus and was later owned by Iadmon. Afterward, he served as a supporter of a Samian man who must have bought him his freedom. He was also rumored to have spent his last days in Delphi.

The Greek essayist Plutarch, on the other hand, had a different story to tell regarding Aesop. According to Plutarch, Aesop was sent to the land of Delphi on a political mission under the orders of King Croesus of Lydia. In the course of his mission, he aggravated the people of Delphi and was thrown off from a cliff where he met his death.

To this day, no records have surfaced providing accurate information of the Greek storyteller other than the fact that his fables have made their homes in the hearts of children and adults.