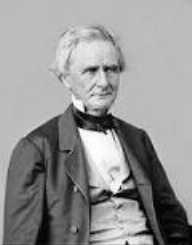 Simon Cameron was born on March 8, 1799. He was an American politician and businessman. At the beginning of the American Civil War, he served as the United States Secretary of War for President Abraham Lincoln. He died on June 26, 1889, at the age of ninety.

Simon Cameron was born on March 8, 1799, in Maytown in Pennsylvania, United States of America. He was born to Charles Cameron and Elizabeth Cameron. He was brought up alongside seven siblings. In 1821, he became the editor of the ‘Bucks County Messenger.’ In 1822, he moved to Washington DC where he took on studying political movements.

While studying, he worked for a printing firm of Gales and Seaton. In the same year, he married Margaret Brua. In 1824, he bought the Harrisburg ‘Republican’ and started running it. In 1825, he was appointed as a state printer of Pennsylvania, a post he held up to 1827. In 1826, he became the state’s adjutant general. He was involved in the construction of railways which he later merged into the Northern Central Railway.

In 1832, Simon Cameron established the Bank of Middletown and at the same time indulged in other businesses. In 1838, he was appointed as a commissioner. His duty was to settle claims which were owing to the Winnebago Indians.

He later started indulging himself in politics, identifying as a Democrat. He greatly supported the campaigns of Martin Van Buren and Andrew Jackson. In 1845, he was elected into the United States Senate, a post he held up to 1849.

After Simon Cameron resigned from the Senate, he moved to his farm at Donegal Springs Cameron Estate near Maytown. He died at his farm on June 26, 1889, at the age of ninety. His remains were buried in the Harrisburg Cemetery in Pennsylvania. The Cameron Parish in Louisiana, US and the Cameron County in Pennsylvania, US are named in his honor.