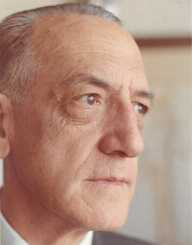 A biochemist and physician by profession, Severo Ochoa first discovered the organic compounds of acid molecules. The two biological syntheses are famously known as deoxyribonucleic and ribonucleic acid. Since inception, Severo Ochoa had a knack for the physical world. In short, he loved natural science which made him join the School of Medicine. No, he didn't want to become a doctor, but his end aim was to further his knowledge in the field of biology.

For the rest of his life, Severo Ochoa worked on the research and study of human body. It took seven decades for him to complete his publications and works. Not to mention, he had over forty honorary doctorates and countable of prizes. Read on to understand more about his early and subsequent achievements.

On 24th, September 1905 a couple called Severo Manuel Ochoa, and Carmen Ochoa was blessed with their youngest son in Laura, Spain. He was none other than Severo Ochoa de Albornoz whose father served as a businessman and a lawyer. At his tender age, Severo Ochoa loved to spend some time with his seven eldest siblings. Sad to say, his eldest brother died when he was just seven years of age. Also, Carmen opted to shift his family to Malaga. It was there that Ochoa commenced with his early education.

Severo Ochoa was taken to the Malaga Institute for his secondary education. While there, he came to love his chemistry tutor who made him fall in love with the subject. Eventually, natural science became his cup of tea. He also looked up to an award-winning neuroscience expert called Santiago Cajal. In the middle of all, Severo Ochoa opted to concentrate on Biology.

Afterward, he joined the Malaga College where he received his bachelor’s degree in 1921.After a year he enrolled at the Medical School of the University of Madrid. Before his graduation, Ochoa went to work as a laboratory instructor under Juan Negrin. It was the only position that he managed to hold for the rest of his student life.

In the mid of 1927, Severo Ochoa traveled to Glasgow for his first internship. There he met Noel Paton who inspired him to work hard towards his end goals. After a long wait, he got hold of his M.D Degree from the University of Madrid.

In 1929, Severo Ochoa went to serve as a laboratory assistant at Kaiser Wilhelm Institute for Biology. It was during his service that he got interested in the study of metabolic reactions in the enzymatic mechanism.

In the mid of 1930, he went back to Madrid with the aim of completing his thesis. The following year, he got a seat as the assistant lecturer in physiology at the University of Madrid. He followed it up with a long break where he joined the London National Institute for Medical Research. He was more than happy to meet Sir Henry Hamlet Dale where the two worked on an enzyme called glyoxalase. He also studied the chemistry of muscle.

During the WWII in 1939, Severo Ochoa was invited by Gerty and Carl to join them at the University of Washington. He traveled to the USA the following year where he went to work at the Washington Varsity as a Pharmacology Instructor. After two years of research and study, Severo Ochoa opted to shift to New York University where he served as the Research Associate in the field of Medicine. While still in the position Severo Ochoa tried to prove his discovery in the condensation of protein synthesis as well as RNA viruses.

Severo Ochoa’s major works included the study and discovery of enzymatic processes in the gain of biological oxidation. He also took the time to work on the transfer of energy. He is best recalled for his research on a metabolic pathway called oxidative phosphorylation. It was the only study that led to the formation of RNA synthesis as well as genetic codes.

In the mid of 1959, Severo Ochoa garnered a Nobel Prize for Physiology with whom he shared with Arthur Kornberg. He followed it up with Neuberg Award, National Medal of Science, Paul Karrer Golden Medal and Medal of New York University in 1959.For a decade Severo Ochoa served as the leading man of the International Union of Biochemistry. Not to mention he also received countable of honoraria’s from various Varsities.

In 1931 Severo Ochoa tied a nuptial knot with Carmen Garcia Cobian. Sad to say, Carmen, breathed her last in 1986 with no child or children of her own. It was on 1st, November 1993 that Severo Ochoa called it quit the world due to pneumonia in Madrid, Spain. In his honor, several research centers have been named after him including a new Research Centre in Spain.