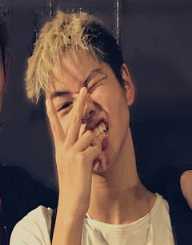 Sean Lew was born on November 25, 2001, in Walnut, California, United States of America. He is a gifted young child with multi-talents. He is a cook, dancer, and a choreographer. Lew is half Chinese and half Japanese. At only 15 years, he has appeared in the X-factor as a dancer at the 2012 Kids Choice Award, competed on the Rachel vs. Guy Kids Cook-off second season finale and also joined talented dance crew called lilBEASTS dance crew.

Sean Lew started dancing while still young. He is passionate about it. He came to the limelight when a video of him dancing to Lady Gaga's "Applause" went viral. He did some great Miguel Zarate combination that left people awed by his talent. The video has earned him a large following on social media: His Twitter, Facebook and Instagram accounts have a following uncharacteristic of a child of his age.

He joined the Mather Dance Studio to help him realize his dream of becoming a professional dancer and choreographer.

Sean Lew has posted many of his videos on YouTube, and they have been well-received by his fans. His dancing moves are unique and entertaining to watch thus the huge following. The popularity that Lew gained helped him to get his first professional job. When he was eight years old, he was hired to host a TV show called "Glee." He also appeared on the "X-Factor" and "Kids Choice Award."

Sean Lew is a choreographer who is talented in designing magical and unique dancing moves. Lew is a member of talented music dance groups such as LilBEASTS. The practice and continued training at the dance club has significantly improved his performances. He has performed in "CollectiveUth" and has also participated in the United States of America "The Pulse on Tour."

His cooking career has also earned him a lot of fame. His recipe has found space on the internet. He has a column in "Beast Network" named "Cooking with Sean Lew." His expertise in preparing Monkey Bread and Deep Fried Burgers has earned her accolades from the massive number of followers of the website. He has also appeared in cooking shows and competitions, the most important being, "Rachel vs. Guy: Kids Cook-Off".

Sean Lew is half Japanese and half Chinese. His parents are Chuck and Miya. He has two sisters Sarah Lew and Serris. He has a talent for cooking, and he has on several occasions indicated that cooking is his favorite activity.

He also has a special liking for pets. He owns a dog named Oreo. He also has numerous friends both on real and on the social media. His dancer friends include Josh Price, Kaycee Rice, Deja Carter, Kenneth San Jose and Wildabeast Adams.

Sean Lew has a significant following in his social media accounts. People have shown a lot of interest in his dancing and most of them describe Lew as a superstar with bright future in the industry.

Sean Lew loves playing the piano. He also likes his mother's home cooked food. His favorite game is basketball, and he loves playing it with his father. His best movie is ‘Step Up 3D'. His greatest wish is to start his TV show soon.