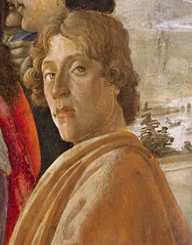 Sandro Botticelli was an Italian painter active during the period of the Early Renaissance.

Alessandro di Mariano di Vanni Filipepi was born in Florence around the year 1445. His father worked as a tanner. He had three older brothers. He started his apprenticeship as a goldsmith at the age of 14. He got the name “Botticelli”, meaning “little barrel”, from the nickname of his brother Giovanni.

In 1462, Botticelli became an apprentice to the artist Fra Filippo Lippi. He started his own workshop a few years later. In 1472, he worked on two panels and a large altarpiece. In 1474, he painted a portrait of Saint Sebastian for the Santa Maria Maggiore church in Rome. He then worked on the painting Adoration of the Magi. He went on to produce seven more versions of this painting throughout the years. In 1480, he made a fresco figure of Saint Augustine for the Ognissanti Church. In 1481, Pope Sixtus IV hired a group of artists to decorate the walls of the Sistine Chapel. Botticelli painted three large scenes there: Punishment of the Sons of Corah, Temptations of Christ, and Youth of Moses. He also painted a few portraits of former popes.

In 1482, Botticelli finished the painting Primavera. It depicts several mythological figures celebrating the arrival of spring. In 1485, he finished the painting The Birth of Venus. It depicts the goddess Venus appearing at sea after her birth. These two paintings became the most important works in his career. They also became two of the biggest masterpieces made during the Renaissance. During this period, he made several more paintings depicting mythological characters. They include Pallas and the Centaur and Venus and Mars.

Botticelli continued creating works with a religious theme. He painted the Bardi Altarpiece, the San Barnaba Altarpiece, the San Marco Altarpiece, and the Holy Trinity Altarpiece. He made two versions of the painting Lamentation over the Dead Christ. He made an illustrated manuscript of Dante’s Divine Comedy. After 1495, he stopped producing large paintings. He worked on a number of small paintings of Madonna and Child. He also created several works with an ancient theme. They include The Tragedy of Lucretia and The Calumny of Apelles.

Botticelli never married and had no children. It’s speculated that he might have been homosexual.

Sandro Botticelli passed away on May 17, 1510. His body was buried at the Ognissanti Church.

Historian Giorgio Vasari wrote about Botticelli in his biography series Lives of the Most Excellent Painters, Sculptors, and Architects. Botticelli’s most important paintings are currently displayed at the Uffizi Gallery in Florence. The others are in galleries and museums all around the globe. Some of his frescoes and altarpieces can still be found in the churches they were painted in.