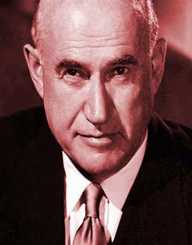 Samuel Goldwyn was a producer, who was also known as Samuel Goldfish.

Samuel Goldwyn was born Szmuel Gelbfisz, on 17 of August 1879. He was the eldest of six children born to parents Aaron Dawid Gelbfisz and Hanna Urban, in Warsaw. Poland.

Samuel Goldwyn's father passed away when he was sixteen, so he left his home and walked to England. In 1895, Szmuel crossed the Oder River, hiked to Hamburg, where a glove maker gave him the money he needed to board the train to England.

Reaching Birmingham, England, Szmuel changed his name to Samuel Goldfish. Somehow, he managed to scourge up enough money to sail to Nova Scotia in 1898.

But the United States was his ultimate goal, and he reached  Gloversville in New York the same year.

Samuel Goldwyn started off as a glove salesman when he first landed in America, and he was vice- president of sales for Elite Fitwell Glove Company after four years of selling gloves. Samuel later quit the job to move to Manhattan, New York.

Their first film, The Squaw Man was one of the first feature films that pioneered Hollywood. It was produced by Samuel, but the company was dissolved with his marriage to Jesse’s sister.

Later in the year, Adolf Zukor bought over movie distributor Paramount Pictures Corporation, with Samuel Goldwyn as the Chairman. By September, Samuel resigned as Chairman and executive member but remained part of the board of directors.

Samuel Goldwyn then went into partnership with the Selwyn brothers: Edgar and Archibald Selwyn,

They formed the Goldwyn Corporation, and they worked together as Samuel had a personal contract with famous actress Mabel Normand, and he wanted their production facility.

Samuel Goldwyn took the opportunity to change his name legally to Samuel Goldwyn in 1916. In 1924, their company was bought over by Marcus Loew.

Samuel had no management or production role at the new Metro-Goldwyn-Mayer (MGM), which is famous for its Leo the Lion logo.

Since 1923, Samuel Goldwyn produced the film via his own company, Samuel Goldwyn Productions. There was a partner at the start, but it quickly became a single enterprise. His first release via the company was a silent film, Potash, and Perlmutter.

Samuel Goldwyn became Hollywood’s most successful independent producer, releasing his movies via United Artists from 1930 until he changed to RKO Radio Pictures in 1941.

Samuel Goldwyn signed many talented actors and actresses, often hiring them out for a hefty price. Samuel also collaborated with famous directors and writers, but many acknowledge that he was difficult to work with.

In total, Samuel Goldwyn produced over a hundred movie titles and had frequently appeared on television as a presenter and a guest.

After Porgy and Bess flopped in 1959, he decided to retire, leaving his son to help him run the production company.

His next hit was The Best Years of Our Lives, produced in 1946. The movie won nine out of ten of its Oscar nominations. The same year, he received the Irving G. Thalberg Memorial Award for his contributions in films.

He also received a Hollywood Walk of Fame Star in 1960. He was awarded the Presidential Medal of Freedom in 1971, in his own home, by President Richard Nixon.

Samuel Goldwyn first married Blanche Lasky, sister of Jesse L. Lasky, in 1910. The pair had a daughter together, before divorcing in 1915. In 1925, he married actress Frances Howard, and they had a son Samuel Goldwyn Jr.

Samuel Goldwyn was ninety- four years old when he died at his home on 31 January 1974. Samuel was buried in California’s Forest Lawn Memorial Park Cemetery. His studio was later sold to Warner Bros.