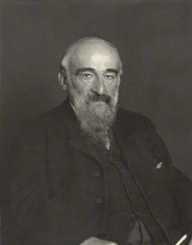 Samuel Alexander was an Australian philosopher who worked in the United Kingdom.

Samuel Alexander was born in the city of Sydney, Australia, on January 6, 1859. His father, also named Samuel, was a wealthy saddler. His mother’s name was Eliza. They were both Jewish. He had two older siblings. His father died before his birth. When he was four years old, his family moved to Melbourne.

Alexander began his education at a private school. In 1871, he enrolled at Wesley College. In 1875, he enrolled at the University of Melbourne. There, he studied mathematics, philosophy, natural sciences, and languages. He was one of the best students. In 1877, he left for England with the intent to win a scholarship for either Oxford or Cambridge. He managed to win one at Balliol College at Oxford University. He studied mathematics, classical literature, and classical philosophy. He got his degree in 1881.

After his graduation, Samuel Alexander became a fellow of Lincoln College at Oxford University. He was the first Jewish fellow of a prominent British university. From 1882 to 1893, he worked as a philosophy tutor. He also developed an interest in psychology. In 1990, he worked at a psychological laboratory in Freiburg, Germany.

In 1893, Alexander got a job as a professor at Owens College at the University of Manchester. He stayed at that position until his retirement. He quickly became one of the most prominent professors there. He was quite informal compared to his colleagues, and he often entered discussions with his students. He retired from teaching in 1924. He continued to grade examinations and review papers until 1930.

Samuel Alexander published his first book, Moral Order and Progress, in 1889. In 1908, he published a story study called Locke. In 1920, he wrote a book about metaphysics called Space, Time, and Deity. The next year, he released Spinoza and Time. In 1925, he published Art and the Material. In 1933, he released a long essay about aesthetics called Beauty and Other Forms of Value. After his death, a collection of his papers was published, called Philosophical and Literary Pieces.

Samuel Alexander never married, and he had no kids. In 1902, his mother, aunt, and siblings moved from Australia to his home in Manchester. They often hosted gatherings that were attended by professors and students from the university. He was also the godfather of the poet and novelist Naomi Mitchison. He gave her plenty of advice, and he helped her with her literary goals.

Samuel Alexander received honorary doctorates from the universities of Oxford, Cambridge, Saint Andrews, Liverpool, and Durham. In 1930, he became the first Australian to receive an Order of Merit from the British King.