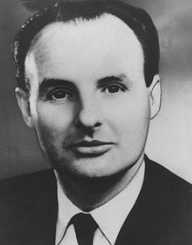 Roy Fontaine is a convicted murderer from England who's murder count reached to a number of five people. He started with petty crimes such as stealing that gradually escalated to murder as he grew older. He has an autobiography entitled "A Perfect Gentleman" which was published in 1999. He died at the age of 72 on September 16, 2002, in Portsmouth, England.

Fontaine is open about his gender orientation, and may even be considered as flamboyant in his ways. An open bisexual, he settled down with a woman but soon discovered that the idea of being tied down unappealing. In his stay at London, he's had numerous lovers and even got into relationships with famous celebrities claiming he's linked with fame playwright Terence Rattigan and Lord Boothby. However, Fontaine has stated in his biography that David Barnard was the great love of his life, who ultimately died in 1974 from a car crash.

During his last series of crimes, the last relationship he's had is with Mary Coggle, a prostitute who is also known as "Belfast Mary", which he also killed to sometime later to cover for his tracks.

Born originally as Archibald Hall in Glasgow, Scotland on June 17, 1924, he was first convicted of theft at the young age of 15. He has a brother named Donald who is also a convicted criminal of which he also murdered later in his life.

At a young age, Fontaine was introduced to the world of sex and intimacy at a young age by a divorced neighbor who was older than him. Joined with his penchant for stealing, he took his loot to London where he found the appeal of the city of London. Later on, he adopted the name of Roy Fontaine to himself, based off on the film Rebecca by esteemed director Alfred Hitchcock.

Surrounded with glamour, Fontaine found more things to steal and more people to a con which landed him in jail more than a few times. It was only after spending a considerable amount of time in jail did he wish to change his ways and adapt to London's elite class. Upon release, he found a job as a butler at Kirtleton House located in Dumfries under Lady Margaret Hudson. While working there, he made the acquaintance of Mary Coggle who would later serve as one of his accomplices. Soon after, they were joined by David Wright, one of his former lovers and also an ex-convict.

A Series of Crime

Wright was hired by Lady Hudson to serve as the gardener and gamekeeper at her estate house where he stole some of her pieces of jewelry and threatened Fontaine should he inform his employer. A bit later, Fontaine executed his first murder and the victim is none other than Wright. He shot Wright at the back while in a rabbit hunting expedition and buried the body in a stream on the estate.

In 1977, he returned to London and worked under the employ of a wealthy couple whose demise also fell into his hands: Dorothy and Walter Scott-Elliot. For his ploy, he asked Michael Kitto and Mary Coggle to help him extort the rich couple.

However, Dorothy soon after discovered Fontaine giving the tour around the estate to Kitto. Before she could reach for the alarm, the two men clamped her mouth shut and used a pillow to suffocate her to death then later on drugged Walter with pills and whiskey.

The trio then drove to Scotland to rid of Dorothy's body, finally settling in at Braco, Perthshire then beat Walter to death and buried him in Glen Affric, Inverness.

Soon after, Mary Coggle was also killed for refusing to get rid of Dorothy's coat. Both men wanted the evidence destroyed but Coggle refused to do so which ended up her being suffocated with a plastic bag. Her body was later on dumped at Dumfriesshire.

Fontaine and Kitto's crimes were halted when an antique dealer alerted local authorities when the two offered his shop expensive silverware and china that is far cheaper than it is priced. The shop owner took note of the plate number of the car, which ultimately belonged to Walter and his wife.

In due time, local authorities discovered the crime scene and soon after, Mary Coggles' body was discovered. The police then tried to connect the dead bodies to the two men they were pursuing. Kitto and Fontaine were stopped at North Berwick by the authorities but Fontaine managed to escape and even reached to Haddington until he was ultimately captured.

His trial started in 1978 and pledged guilty to the murders. He was sentenced to life imprisonment and was described as a psychopath and charged with four life sentences.