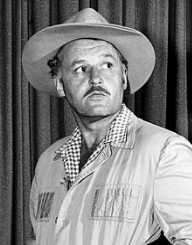 Rod Steiger (1925-2002) was an American actor appearing in a film, plays, and television. He was known for his intense performances and method acting. Some of his most famous movies were The Pawnbroker (1964) and In the Heat of the Night (1967). He was a prolific actor, appearing in more than 100 films.

Rodney Stephen Steiger was born in Westhampton, New York on April 14, 1925. His parents, Frederick Steiger and Lorraine Driver, were traveling song and dance performers. They divorced when Rod was a small child, and he was brought up by his mother. Rod and Lorraine moved around several times and eventually settled in Newark, New Jersey.

Steiger had a difficult childhood. His mother was an alcoholic, which often brought embarrassment to Rodney. He attended West Side High School in Newark, but only for a year. When he was 16, he quit, lied about his age and joined the US Navy to fight in World War II after the Pearl Harbor attacks. He served in destroyers and was in several battles, including the famous battle of Iwo Jima.

After the war, Rod Steiger decided to try acting. He attended the New School for Social Research, where he was further encouraged to pursue acting and study at the Dramatic Workshop. His first performance was in the play Curse you, Jack Dalton! (1946) In Newark. He was invited to study method acting in Actors Studio, along with other famous actors like Marlon Brando and Eli Wallach.

Rod Steiger began his acting career in the theater. His first significant role in Broadway was in the play Night Music (1951). Then, in the early 1950s, he moved to Hollywood and started appearing in films. His first major movie was Teresa (1951).

During the 1950s he also had several TV appearances. He began playing small roles and gradually earned more important ones. He gained public exposure and started getting recognition by the critics. In 1953 he received several awards for his television roles, including his performance as the lead character Marty in the TV series Philco-Goodyear Television Playhouse.

Rod continued his work in films throughout the 1950s. In 1954 he appeared alongside Marlon Brando in On the Waterfront and was nominated for an Academy Award for Best Supporting Actor. He also starred in musical Oklahoma (1955), and The Harder They Fall (1956). In 1959, he also appeared in the movie Al Capone as the title character. This performance earned him a nomination for a Laurel Award for Best Male Dramatic Performance. Also in 1959 he returned to work on stage and appeared in the play Rashomon, which was very successful. It garnered many favorable reviews and was nominated for three Tony Awards.

During the mid-to-late 1960s, he played many of his most famous movie roles. In 1964, he appeared in The Pawnbroker, playing a Holocaust survivor. This was the role he considered as the best performance of his career. It earned him the award for Best Actor at the Berlin International Film Festival, as well as an Academy Award nomination for Best Actor.

In 1965 he appeared in Doctor Zhivago, which was a huge box office success and is considered one of the best movies ever made. Then, in 1967 he played chief of police Bill Gillespie in In the Heat of the Night, along with Sidney Poitier. This role earned Steiger the Academy Award for Best Actor. He also won a BAFTA and a Golden Globe, among other awards.

Steiger also played several historical figures. In 1970 he appeared as Napoleon in the film Waterloo and later starred as Benito Mussolini in Last Days of Mussolini (1975). In 1977 he played Pontius Pilate in the TV miniseries Jesus of Nazareth.

During the 1980s he often turned to B-movies and TV miniseries due to health concerns, both physical and mental. Some of his later works included a role in The Hurricane (1999), and The Last Producer (2000). His final movie role was in Poolhall Junkies in 2002. It received poor reviews.

Rod Steiger was married five times. His first wife was actress Sallie Gracie. They were married from 1952 to 1958. Next, in 1959 he married English actress Claire Bloom, whom he had met while performing for the play Rashomon. They had a daughter, Anna Steiger (1960), who is now an opera singer. Rod and Claire divorced in 1969. His third wife was Sherry Nelson, whom he wed in 1973 and divorced in 1979. In 1986, he married Paula Ellis. They had a son, Michael Steiger (1993), and divorced in 1997. Rod’s fifth and last wife was Joan Benedict Steiger. They married in 2000 and were together at the time of his death.

In the late 1970s, Steiger suffered some health issues which resulted in two open-heart surgeries, first in 1976 and then in 1979. He also battled obesity. His health problems triggered his depression, a mental health issue he fought throughout his life. He considered quitting acting and even had thoughts of suicide. Therapy and medication eventually helped him get his depression under control. Rod was sensitive to the perception of people with mental illnesses, especially depression. In his later years, he spent time-fighting the prejudice against mentally ill people and helping raise awareness of the spiritual disease. He received a Gift of Life award for his efforts.

Rod Steiger died when he was 77 years old, on July 9, 2002. He succumbed to pneumonia and complications from a recent surgery he underwent for the removal of a gall bladder tumor.