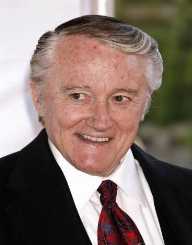 Robert Vaughn was born on November 22nd, in 1932. He is famous for being an American actor. He is best remembered for the role he played in The Man From U.N.C.L.E- 1960.

Robert Vaughn was born on November 22nd, in 1932. His birthplace was in the New York City. He was born to parents who also believed in acting. His father, Gerald Walter Vaughn, for example, worked as a radio actor. On the other hand, Marcella Frances, his mother was a stage actress.

Robert Vaughn went to the University of Minnesota where he majored in journalism. Unfortunately, he did not spend much time at the university for dropped out after just a year. He moved with his mother to Los Angeles. Shortly after, he joined Los Angeles City College. He again changed schools and went to Los Angeles State College of Applied Arts and Sciences. He graduated with a master’s degree from this college. After this, he joined the University of Southern California where he earned his communications Ph.D.

Robert Vaughn's career in the entertainment industry first took off with his role in the TV industry. He featured in Medic TV show in 1955. The following year, he made his first film appearance with the movie dubbed The Ten Commandments. Unfortunately, he was not credited for his role in this film. Nonetheless, he was credited the following year in 1957 with the role he played in Hell’s Crossroads.

His first significant role in the film industry came in 1959. He featured as Chester Gwynn in the film The Young Philadelphians. This was a drama film that was directed by Vincent Sherman. Due to his exceptional performance, Vaughn earned himself an Oscar nomination under the category of best-supporting actor.

It is also during the 1960s that he featured in The Man from U.N.C.L.E -1964. This was a show that was aired from 1964 to 1968. He was playing the role of Napoleon Solo. His role in the show brought him to the limelight as he earned himself a huge fan base.

In 1974, Robert Vaughn tied the knot with Linda Staab. She was also an actress and that they played alongside each other in TV series called The Protectors –1972 – 1974. The couple did not have children of their own, and therefore they adopted a daughter named Caitlin.

Robert Vaughn passed away on November 11th, in 2016. He died as a result of acute leukemia. He was 83 years old at the time of his demise.