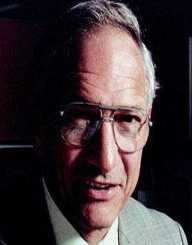 Also Known For : Entrepreneur, Coinventor Of The Integrated Circuit

Inventor and co-founder of Intel Robert Noyce was born on the 12 December 1927 in Burlington, Iowa.

Robert Noyce received a B.A. from Grinnell College, Iowa in 1949 and his Ph.D. in physical electronics from Massachusetts Institute of Technology in 1953.

After obtaining his doctorate, Robert Noyce worked for Philco Corporation, and when William Shockley called and offered him a job, he moved to California and took up a position at Shockley Semiconductor Laboratory designing and making transistors.

Robert Noyce left Shockley in 1957 and founded Fairchild Semiconductor. Together with Jack Kirby, Noyce invented the integrated circuit, and in 1968, Noyce started Intel Corporation with Gordon E. Moore in Mountain View. In 1971 the company relocated to Santa Clara, California. Intel developed the first commercially viable RAM (i1103), the first EPROM (i1702) and the first commercially available microprocessor (i4004).

Robert Noyce won many awards including sharing the Stuart Ballantine Medal from the Franklin Institute which was given for his work developing integrated circuits. He also shared the 1978 Cledo Brunetti Award for his work. The same year he won the IEEE Medal of Honor, and the IEEE also established the Robert N Noyce Medal in recognition of his services to the microelectronics industry. Other awards include the Faraday Medal (1979), the Harold Pender Award (1980), President Reagan presented him with the National Medal of Technology in 1987 and in 1989 he was inducted into the US Business Hall of Fame.

Robert Noyce married Elizabeth Bottomley in 1953, and the couple had four children: William, Pendred, Priscilla, and Margaret. They divorced in 1974, and he married Ann Schmaltz Bowers.

Robert Noyce died on the 3 June 1990 of a heart attack. He was sixty-two years of age.

His family set up the Noyce Foundation in 1990 which operated until 2015. The focus of the foundation was to improve public education in science and mathematics.

Robert Noyce’s first wife Elizabeth Bottomley spent her final years in Maine, dying at the age of 65 in September 1996. She was known for being a philanthropist who according to the New York Times, gave away $75 million to various charitable causes. The paper quoted her lawyer as saying that her estate was worth $100 million to $1 billion after the donations. Bottomley had divorced Robert Noyce under California community property laws which meant she claim half Noyce’s Intel stock and all other assets.