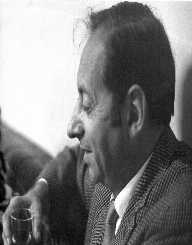 Robert Bloch was born on April 5, 1917, in Chicago, Illinois, USA. His parents were Stella Loeb and Raphael Bloch.

As a teenager, Robert Bloch attended Lincoln High School in Milwaukee. While at the school, he wrote for the school’s magazine. It was while in high school, when he was 17 years old, that he wrote his first short story. After graduating from school, he worked with the school’s drama department, as he loved both writing and the theater.

Shortly after graduating high school, in 1935, he joined The Milwaukee Fictioneers. This group helped Robert Bloch to improve his writing skills.

One of Robert Bloch’s first writing jobs was working as a copywriter. He was hired by one of the members of The Milwaukee Fictioneers, Gustav Mark. Soon after this, he also started to write for Carl Zeidler’s campaign.

One of Bloch’s most famous short stories, Yours Truly, Jack the Ripper, was published in Weird Tales magazine in 1943. Aside from this story, Bloch was publishing many other similar scary stories in magazines like this around the country. Horror, thriller, and suspense were some of his favorite genres to write it, and it would be these types of stories that would later make him famous.

Bloch’s first novel was published in 1947 and was called The Scarf. This book made a name for him as a thriller/horror writer; although, it did not make him famous.

The 1950’s were a highly productive time for Robert Bloch. During this decade he wrote a few novels, including Spiderweb, The Will to Kill, and what would be his most famous novel ever: Psycho. Psycho was a hit almost as soon as it hit the bookstore shelves. Soon after the book came out, the film rights were bought by the famous director, Alfred Hitchcock for $9,500, which is about the same as $85,000 now. Needless to say, this payment combined with the sales of his books made Bloch a very rich and successful man.

After Hitchcock made Psycho, Robert Bloch began working with him more. He was one of the writer’s for a show called Hitchcock Presents. However, this did not last long, as writers for the show went on a strike soon after he began working here. Luckily this did not ruin his relationship with Hitchcock.

In 1960, the Psycho movie finally came out. In this same year, Robert Bloch wrote another novel, The Dead Beat. Throughout the rest of the 1960’s, Bloch focused on writing screenplays for television shows, working for Alfred Hitchcock Presents again, as well as for other shows.

Through the 1970’s and 1980’s, Robert Bloch continued writing screenplays, mostly for television shows. He also wrote several novels during this time. He retired from writing near the end of the 1980’s. Over the course of his career, Bloch has written hundreds of short stories, dozens of screenplays, and dozens of novels. Some of his most famous works are listed below.

All of Robert Bloch’s awards are due to his writing. Some of his most prestigious awards are listed below.

Robert Bloch was first married to Marion Holcombe in 1940. Together, the couple had one child: Sally. Sadly, the couple later divorced in 1963. He married for a second time in 1964 to Eleanor Alexander. The couple remained married until Bloch’s death.

Robert Bloch died on September 23, 1994, in Los Angeles, California, USA. The cause of death was complications due to cancer. He was 77 years old when he passed away.

Psycho is one of Bloch’s most famous works. Numerous other works, namely screenplays, have been written based on his story, both during this life and after his death. One of the most famous adaptations of his books was the show Bates Motel, which was based on the characters in Psycho.

Many writers have written papers and books on Bloch’s works, both during his lifetime and after his death. Some of the works written about him are The Existential Robert Bloch, Bloch: A Bio-Bibliography, and Robert Bloch: The Man Who Collected Psychos.

Many of Bloch’s works have been adapted into comic books. Some of the comic adaptations are Hell on Earth; Yours Truly, Jack the Ripper; and The Beasts of Barsac.