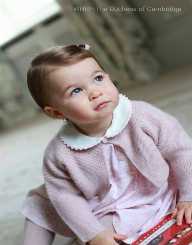 Princess Charlotte Cambridge, born Charlotte Elizabeth Diana is the only daughter and youngest child of Prince William, Duke of Cambridge and Catherine, Duchess of Cambridge. Born on May 2, 2015, at precisely 8:34 am, at the St Mary’s Hospital, she was met with lots of warm messages from around the world. The Princess is the fourth in line to the throne after her grandfather, father, and elder brother.

The expectancy of Princess Charlotte Cambridge into the world was first announced by the Clarence House on 8 September 8, 2014, after the Duke and Duchess of Cambridge revealed it. The world was finally told in November by the Kensington Palace that the arrival of the Princes would be April in 2015. Though the schedule birth month according to the Palace was April, the Duchess of Cambridge delivered a bouncing baby girl, Princess Charlotte Cambridge on May 2, 2015, at precisely 8:34 at the St Mary’s Hospital in Paddington, London. She was weighed 8lb 3oz. It was also the hospital she delivered her first child and interestingly, her husband, Prince Williams was even born there.

It is on record that midwives Arona Ahmed and Jacquie Dukley-Bent along with doctors like Alan Farthing, surgeon-gynecologist, Sunit Godambe consultant neonatologist at the hospital and alsoGuy Thorpe-Beeton an expert in high-risk pregnancies and surgeon-gynecologist of the Royal Household among several others helped in the delivery of the Princess. The family presented the newborn child to the same public day just after about 10 hours of her birth.

Several landmarks in the United Kingdom and Canada, including London Eye, Tower Bridge, Peace Tower in Ottawa, Ontario and the Trafalgar Square marked her birth by illuminating pink. There was also a gun salute at the Hyde Park and the Tower of London on May 4, 2015. The family on the same day announced her name as Charlotte Elizabeth Diana but would formerly be called Her Royal Highness Princess Charlotte of Cambridge.

Prince Charlotte was christened on July 5, 2015, at the St Mary Magdalene Church, Sandringham the Archbishop of Canterbury with water from the River Jorda. After the baptism, she was taken to a Church in a Milson pram where the locals in the area were invited to join the occasion. There, the family was joined by other members of the Royal family including The Queen, The Prince of Wales, and The Duke of Edinburgh among several others. Photos of the event were later released.

On her first birthday, she was showered with gifts from some world leaders and individuals. The then British Prime Minister David Cameron presented her with a book of Hans Christian Andersen fairy tales and The Natural Sapphire Company in the United States gifted her with a £30,000 gemstone-studded white gold toy rattle. Her first public appearance was on June 11, 2016, on the balcony of Buckingham Palace.

A year after her birth, the lipstick “Charlotte” named after her was debuted by Marc Jacobs. Also, the Princess Charlotte chrysanthemum displayed at the Chelsea Flower Show is in her honor.