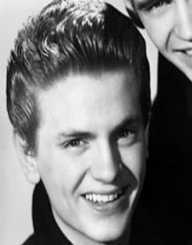 Phil Everly who found fame as part of the Everly Brothers with his brother Don (b.1937) was born in Chicago, Illinois on the 19 January 1939. He spent part of his childhood in Shenandoah, Iowa, and Tennessee. His parents were Ike Every and Margaret Everly. His father was a bluegrass and country music musician originally from Muhlenberg County, Kentucky.

Everly was exposed to music from a young age and alongside his brother Don, played in a band the Everly family with his parents. The Everly Family toured the south and mid-western states and also performed live on the radio in Shenandoah, Iowa until the early 1950s.

American musician Chet Atkins was a friend of Everly’s parents, and he was instrumental in getting the Every Brothers’ career off the ground. Atkins signed Don Everly to his company, Athens Music. Don’s composition Thou Shalt Not Steal was recorded by Kitty Wells who had a hit with it (1954). Atkins then assisted the brothers in signing with Columbia records. They recorded a single The Sun Keeps Shining (1956) which went largely unnoticed.

It was after being introduced to Wesley Rose, who had his music publishing firm, Acuff-Ross, that the brothers had their first hit. Bye Bye Love was written by Acuff-Rose writers, Felice, and Boudleaux Bryant and recorded on the Cadence label. Rose was by the time the manager of the Everly Brothers.

Bye Bye Love (1957) reached number one on the country charts. The song also reached number two on the pop charts around the time Elvis Presley’s Let Me Be Your Teddy Bear was number one. The success of Bye Bye Love resulted in tours with Buddy Holly as well as Johnny Cash and appearances on the Ed Sullivan Show and the Grand Ole Opry.

The Everly Brothers had further hits including Wake Up Little Susie, All I Have to Do Is Dream and Bird Dog, all written by the Bryants. They also had a hit with Don’s composition Till I Kissed You. Warner Brothers offered the Everly Brothers a ten-year contract, and they had their first hit with the label with Cathy’s Clown which was written by Don Everly. Cathy’s Clown topped the charts in both the UK and the US.

The Everly Brothers had further hits with So Sad To Watch Good Love Go Bad (1960), Walk Right Back (1961), Crying in the Rain (1962) and That’s Old Fashioned (1962). That’s Old Fashioned was their last US top ten hit. With the emergence of bands such as The Rolling Stones and The Beatles, The Everly Brothers appeal started to decline in the early 1960s, but they retained a following in Australia, Britain, and Canada. They continued touring and recording until 1973 when the brothers had a falling out on stage in California and disbanded.

The Everly Brothers reunited for a concert at the Royal Albert Hall in London and released the album, The Everly Brothers Reunion Concert (1983). In 1984 they released EB 84 which contained On the Wings of a Nightingale which Paul McCartney had penned. They recorded the album Born Yesterday and had a top 20 country yet with the title tune. The brothers were also asked to sing on the title track of Paul Simon’s Graceland. Simon & Garfunkel had been lifelong fans of The Everly Brothers and invited them to join their Old Friends reunion tour (2003-2004).

Phil Everly released the single Star Spangled Springer in 1973 and followed it up with Diner (1974) and Mystic Lane (1975).  He appeared on screen in the Clint Eastwood film Every Which Way But Loose (1978) performing Don’t Say You Don’t Love Me No More with Sondra Locke. He wrote One Too Many Women in Your Life for the sequel Any Which Way You Can (1980). In 1983, British musician Mark Knopfler appeared on Everly’s album Phil Everly which was recorded in London. She Means Nothing to Me was a top ten hit in the UK and also featured Cliff Richard sharing lead vocals.

The Everly Brothers music and vocals influenced The Hollies, The Beatles, Simon & Garfunkel and many others.

The Everly Brothers were inducted into the Rock & Roll Fame of Fame in 1986 and the same year were given a star on the Hollywood Walk of Fame. They received a Grammy Lifetime Achievement Award (1997). In 2001, they were inducted into the Country Music Hall of Fame and in 2004, into the Vocal Group Hall of Fame. Rolling Stone magazine listed them as number 33 of the 100 Greatest Artists of All Time.

Phil Everly was married three times; his third wife was Patti Arnold (m.1999) who he was married to at the time of his death. He had two sons, Chris and Jason. Phil Every died on the 3 January 2014 from pulmonary disease.

The Everly Brothers had a falling out with their manager Wesley Rose which led to the Everly Brothers being blacklisted by Rose’s music publishing company. In later years, Don Everly has sued his brother Phil’s estate over the ownership of the rights to royalties for Cathy’s Clow.