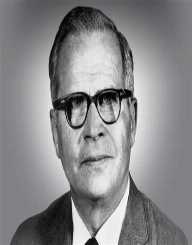 Peter Carl Goldmark was born 2nd December 1906 in Budapest, Austria-Hungary. He completed his graduate schooling in Vienna. After migrating to the United States, Goldmark found a position at CBS Laboratories in 1936. In 1937, he became a citizen of the U.S.

Goldmark is best known for inventing the 33 1/3 rpm long-playing record, or LP as they became known. He remained with CBS Laboratories for the next twenty years, working on several other inventions and projects. The LP record was the industry standard right through until the late 1980s, when CDs took over.

Goldmark's other famous work was color television. He showcased his system in August 1940 while working at CBS. The method was called "field-sequential color technology." The technology wasn't compatible with the black and white television sets on the market at the time, so an adaptor was needed.

At the same time, a team of engineers developed the "compatible color" technology for RCA and NBC. The technology was compatible with existing black and white televisions so had a much higher uptake.

Goldmark retired from CBS Laboratories in 1971. He formed his own company, Goldmark Communications.

Goldmark continued to work and research on projects such as technologies used for teleconferencing. He also received funding from the U.S. National Science Foundation. The funding assisted with his work in providing medical consultations to people living in remote rural areas.

Goldmark died on 7th December 1977, in a car accident.

Among his awards and honors, Goldmark has the following:

Goldmark married Frances Trainer. The couple had four children, but they divorced sometime later. His second marriage was to Diane Davis. He had two more children with Davis.