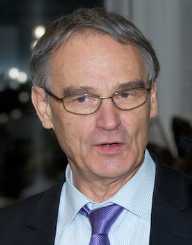 Percy Williams Bridgman was born on April 21, 1882. He was an American physicist. In 1946, he received the Nobel Prize in Physics. He designed the self-tightening joints which allowed scientists to engage in experiments with pressures up to four hundred and twenty thousand kilograms per square centimetre.

Percy Williams Bridgman was born on April 21, 1882, in Cambridge, Massachusetts. He was born to Raymond Landon who was a newspaper reporter and Mary Ann Williams who was an author. He was interested in studying science from a young age. His family moved to Newton where he attended the Newton North High School. In 1900, he graduated high school and joined Harvard University. In 1904, he graduated with a BA in physics and mathematics from the University. In 1905, he did his MA from the university. In 1908, he received his Ph.D. degree. In 1908, he began working as a fellow for the university until 1910.

In 1910, Percy Williams Bridgman became a lecturer of physics at the Harvard University. In 1913, he was made an assistant professor. In 1919, he became a full professor. In 1926, he became the Hollis Professor of Mathematics and Natural Philosophy at the University. The following year he suggested the ‘Theory of Operationalism.’ In 1942, he was made the President of the American Physical Society. In 1950, he became the Higgins Professor of Physics at the Harvard University. In 1955, he became a consultant at the General Electric Company. He retired from teaching at Harvard in 1954.

In 1917, Percy Williams Bridgman was awarded the Rumford Prize by the Academy of Arts and Sciences. The following years he was inducted into the National Academy of Sciences. In 1946, he won the Nobel Prize in Physics. In 1951, he was awarded the Bingham Medal by the Society of Rheology.

Percy Williams Bridgman received several honorary doctorates from institutes such as Stevens Institute/, Brooklyn Polytechnic and Yale University among so many other institutes. He was also a fellow to several associations such as the American Academy of Arts and Sciences, The American Philosophical Society, The American Association for the Advance

In 1912, Percy Williams Bridgman married Olive Ware with whom he had two children, Jane Ware and Robert Ware. He died on August 20, 1961, when he shot himself at his residence in Randolph in New Hampshire. In 1977, the Percy Williams Bridgman Award was created in his memory by the International Association for the Advancement of High Pressure Science and Technology.