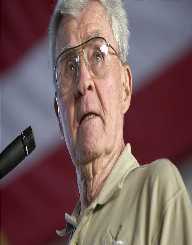 Paul Warfield Tibbets Jr. was born on February 23, 1915, in Quincy, Illinois. When he was five years old, his family moved to Davenport, Iowa and later to Des Moines. His father worked there as a confections wholesaler. When Tibbets was eight years old, his family moved once again, to Miami, Florida. Tibbets was interested in flying since he was a boy after his mother payed one dollar to get him on an airplane at the local carnival. In 1927, Tibbets flew in a plane, piloted by barnstormer Doug Dais.

During the 1920s, his father faced some business issues, and the family moved to Alton, Illinois. Tibbets attended the Western Military Academy and graduated in 1933. He then went on to study at the University of Florida in Gainesville. During his time at the University, Tibbets began taking flying lessons at Miami Opa-Locka Airport. Tibbets was planning to become an abdominal surgeon and did his pre-med studies at the University of Cincinnati. However, he attended the university only for a year and a half, since he changed his mind and decided to enlist in the United States Army. He became a pilot in the United States Army Air Corps.

Tibbets’ previous education qualified him for the Aviation Cadet Training Program. Tibbets enlisted in the army in 1937 in Fort Thomas, Kentucky. His primary training took place at Randolph Field in San Antonio. After graduation, Tibbets was assigned to the 16th Observation Squadron in Georgia. There he met his future wife, Lucy Frances Wingate. The couple married in 1938 in a quiet ceremony and later had two sons.

In Fort Benning, Tibbets was promoted to the first lieutenant and served as a personal pilot for Brigadier General George S. Patton Jr. In 1941, Tibbets transferred to 9th Bombardment Squadron in Hunter Field, Savannah, Georgia and was promoted to captain.

In August 1942, Tibbets flew the lead bomber Butcher Shop for the heavy bomber mission against a marshaling yard in Rouen, France. In September, Tibbets led the American raid of more than 100 bombers in Europe, attacking industrial targets. The mission was of poor bombing accuracy and resulted in a lot of civilian deaths. However, the mission was hailed a success, since it reached its target despite heavy bomber attacks. Tibbets later led the Allied invasion of North Africa, and a few weeks later he flew the Supreme Allied Commander, Lieutenant General Dwight D. Eisenhower.

After flying 25 missions against targets in France, his bomb group was transferred to North Africa as a part of the 12th Air Force. In 1943, Tibbets was assigned as the assistant for bomber operations to Colonel LaurisNorstad. Tibbets was supposed to receive a promotion as a colonel. However, it did not happen since Norstad vetoed the promotion saying there can only be one colonel in operations. The two did not get along well and had several disputes about missions.

Tibbets was recommended to General Henry H. Arnold, the Chief of United States Army Air Forces when he requested an experienced bombardier pilot for the development of Boeing B-29 Superfortress bomber. In 1943, Tibbets returned to the United States. However, the B-29 program suffered major technical difficulties. While test-flying the bomber, Tibbets acquired more flight time than any other pilot. After a year of testing, Tibbets was assigned as a director of operations of the 17th Bombardment Operational Training Wing, a B-29 training unit. In 1944, Tibbets was reported to Colorado Springs Army Airfield and met with the representatives of the Manhattan Project.

In 1945, Tibbets named his B-29 Enola Gay after his mother. On August 6, 1945, Enola Gay departed North Field for Hiroshima, Japan with Tibbets at the controls and Robert A. Lewis as his copilot. The bomb Little Boy was dropped on Hiroshima at 8:15 local time. Tibbets was awarded the Distinguished Service Cross immediately after landing on Tinian, and the 509th Composite Group received an Air Force Outstanding Unit Award in 1999. Tibbets became a major celebrity, and he and his wife were extensively interviewed in the aftermath.

Tibbets and the 509th Composite Group returned to the United States in 1945 and was stationed in Roswell Army Airfield in New Mexico. Tibbets became the advisor to the 1946 Operation Crossroads nuclear tests in the Pacific. Afterward, he attended the Air Command and Staff School at Maxwell Air Force Base in Alabama. He graduated in 1947 and was posted to the Directorate of Requirements at Air Force Headquarters at the Pentagon. He was placed as the Director of the Directorate of Requirement’s Strategic Ari Division and got involved in the Boeing B-47 Startojet program.

Tibbets returned to Maxwell Air Force Base and attended the Air War College, which he graduated in June 1955. After graduation, he became the Director of War Plans at the Allied Air Forces in Central Europe Headquarters at Fontainebleau, France. He and his wife divorced that year since he left them in the United States. In France, he met Andrea Quattrehomme and married her. The couple later had a son James. In 1956, Tibbets returned to the United States and became the Commander of the 308th Bombardment Wing.

In 1958, Tibbets became the commander of the 6th Air Division and was promoted to brigadier general the following year. In 1962, he was assigned to the Joint Chiefs of Staff as deputy director for operations, and the following year became the deputy director for the National Military Command System. After this, Tibbets became a military attaché in India and was posted there for 22 months, until 1966.

Tibbets retired from the military in 1966 and began working for Executive Jet Aviation- an air taxi company based in Columbus, Ohio. He retired from the company in 1968 and returned to his childhood home in Miami, Florida. In 1970, he was lured back to Executive Jet Aviation and in 1976, succeeded Bruce Sundlun as the president of the company. He remained in the post until 1986. In 1995, Tibbets denounced the 50th-anniversary exhibition of Enola Gay at the Smithsonian Institute, since the event focused more on the Japanese casualties, rather than the brutality of the Japanese government. In 1996, he was introduced in the National Aviation Hall of Fame.

Tibbets died in Columbus, Ohio on November 1, 2007, at the age of 92. During his final years, he had suffered from several small strokes and heart failure. He spent his final year of life in hospice care. He asked for no funeral or headstone since he feared that the opponents of the bombing would use his grave as a place where to protest. Instead, his ashes was scattered over the English Channel.