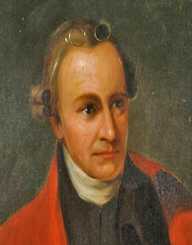 Patrick Henry was born on May 29, 1736, in Virginia. His parents were John Henry and Sarah Winston Syme. He also had eight siblings.

Patrick Henry came from a humble farming family. His education was a mix of public schooling and lessons from home and from the Bible. As a teenager, he helped his father to run a store, but it did not last long, as the store was unprofitable. Soon after, he married. With the marriage, he received 300 acres of land and several slaves as a dowry. With the land, he ran his tobacco plantation. This did not last long, either, as his home and many crops burned in a fire in the 1750’s. In the late 1750’s, he worked in a tavern. The tavern did not pay enough to support his large (and still growing) family, so he decided to study law.

Patrick Henry’s law career began in the early 1760’s. One of his most defining moments as a lawyer was when he fought against the Two Penny Act. This act put a tax on tobacco. Patrick Henry fought against this because, with the tax, tobacco farmers would earn less money on their crops. He based his argument on saying that it was the right of the farmer to keep their money. This trial made him a celebrity in the world of lawyers. Afterward, he was elected to the House of Burgesses (part of the Virginian government).

Later, a similar case came up: Stamp Act of 1765. The act was passed by the British to tax people in the American colonies. While the tax was not especially expensive, people in the American colonies hated that they were being taxed more than British citizens. Even ignoring that, they were being taxed by the British, instead of by their governments, which they hated. Patrick Henry suggested some ways to go around the Stamp Act; his ideas later called Patrick Henry’s Resolutions. However, only four of his resolutions were used, as other government officials (including the governor of Virginia at the time) thought some of the suggested resolutions were too extreme.

The Committee Of Correspondents

In 1773, Patrick Henry worked with Thomas Jefferson to make a Committee of Correspondents within the House of Burgesses. The committee was made to focus on individual colonies rights and needs, as well as how the colonies worked with each other. Other colonies took a page from Patrick Henry’s book and made similar committees of their own. As the committee went on, Patrick Henry rose in ranks, becoming a delegate in 1774. In the same year, the House of Burgesses was disbanded.

Tensions were rising between the American colonies and the British Empire. The colonies were getting more irritated with Britain's taxes and their lack of freedom. In the mid-1770’s, the colonies were beginning to decide if they wanted to go to war with Britain or not. It was around this time that Patrick Henry gave his famous, “Give me liberty or give me death,” speech, which he gave as an argument for going to war.

In 1775, Patrick Henry became the colonel in the 1st Virginia Regiment, after recovering gunpowder (that had been moved by order of Virginia’s governor). He fought in this position (in the Revolutionary War) for about six months. He resigned from his post in 1776, as he realized that the military was not for him.

Patrick Henry worked to write Virginia’s new constitution in 1776 (as the United States had written their Declaration of Independence earlier the same year, and had made the colonies into states). In the same year, he became the first governor of Virginia (under the new Declaration). He worked as a governor until 1779, which is as long as the term limits allowed, at least consecutively.

After leaving the station as governor, he worked in the Virginia Assembly (1780-1784). At the same time, he bought land and started a tobacco plantation.

Patrick Henry was re-elected as Virginia’s governor in 1784, as he was allowed since he took a break from the post. As governor, he worked hard to solidify state’s rights over federal rights. He feared a strong federal government would work too much like the monarchy in which the once-colonies had recently escaped from. After the Bill of Rights was written, he worked to have it added to the Constitution. He worked as governor until his term was up in 1786.

After his term as governor was up again, Patrick Henry went back to his plantation. He did some work as a lawyer again, but stayed out of politics for the most part, as his health was becoming a problem.

Patrick Henry suffered from poor health near the end of his life. Various illnesses, and what is now believed to have been stomach cancer, ended his life. He died on June 6, 1799, in Brookneal, Virginia. He was 63 years old when he passed away.

Patrick Henry is known throughout the United States as a Founding Father of the country for his contributions to leaving England’s rule and putting his input into the constitution.

Patrick Henry helped to set up Hampden-Sydney college in 1775. He was a trustee of the college until his death.

High schools all over the United States have been named after this historical figure.