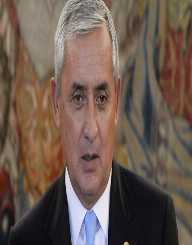 Also Known For : President Of Guatemala

In the late 1960’s, Otto Perez Molina attended the Guatemala National Military Academy. He graduated from the school in 1969. Afterward, he attended the Inter-American Defense College.

The Guatemalan Civil war began in 1960 and went on until 1996. Otto Perez Molina joined the Guatemalan Army to fight in this war, around the time the war was halfway over. In the army, he worked in the special forces division.

He supported the coup against Efrain Rios Montt, who was a cruel dictator of Guatemala from 1982 to 1983. Later on in the war, from 1992 to 1993, he worked as a D-2 Directorate of Intelligence. In this job, Otto Perez Molina was helping to obtain information from the Guatemalan National Revolutionary Unity (GRNG). He proved to be great at his job, and he was promoted to Chief of Military Intelligence in 1993. Later that same year he was promoted again to Presidential Chief of Staff. He worked in this position until 1995. In 1996, when the Civil War was coming to an end, he was one of the main people who helped with the Peace Accords.

After the Civil War, Otto Perez Molina served on the Inter-American Defence Board. Also after the war, the GRNG was disbanded as a hostile military unit. However, it did reform later as a political party. Perez Molina retired from the defense board and the military in 2000.

As president, Otto Perez Molina set in motion several programs to make Guatemala safer and healthier. One of his programs, the Zero Hunger Program, has a goal of feeding the poor in the country, as malnutrition and starvation are serious problems in the country. The program has done some good already, but critics of the program say it needs more funding to help the poor in Guatemala truly. As far as safety is concerned, the homicide rate has also dropped since Perez Molina has been in office. Tourism, investments from other countries, and general security are up since he has been in office as well.

However, in 2015, Otto Perez Molina was found to a part of a corruption ring that was taking bribes and tampering with tariffs. He was forced to resign from the presidency in the same year. He was later sent to the Matamoros Prison in Guatemala City. Perez Molina’s vice president, Alejandro Maldonado Aguirre, took over after his arrest.

Otto Perez Molina was awarded the BRAVO Business Award for Leader of the Year in 2013.

Otto Perez Molina married Rosa Maria Leal. The couple has two children together: Lissette Perez and Otto Perez Leal. Otto Perez Leal is now all grown up and is also involved in politics, like his father.