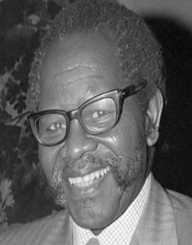 Oliver Tambo is one of the prominent figures of the anti-apartheid regime who worked alongside civil rights activist Nelson Mandela. He died on April 24, 1933, due to complications of a stroke at the age of 75 in Johannesburg.

Oliver Tambo married a woman named Adelaide whom he met at the Youth Congress held by the African National Congress (ANC). At the time, Adelaide was working as a nurse when the two met. The couple had three children together and were buried side by side at Tambo’s final resting place in Benoni, Johannesburg.

Born on October 27, 1917, as Oliver Reginald Kaizana Tambo in the village of Nkantolo, Bizana, he came from the people of the Pondo tribe. Coming from a humble family of farmers, his father, a man, named Mzimeni, also worked as a salesperson while his mother Julia was illiterate. For his primary education, he attended a school at Holy Cross Mission and transferred in Johannesburg at St. Peter’s.

A brilliant student, he was awarded a scholarship to the prestigious University of Fort Hare for a time. During that time, Fort Hare was the only university which admitted black students, but due to his activism, he was expelled alongside other students, including Nelson Mandela.

Oliver Tambo's passion for the development of his country started as far back as his university days wherein in 1943, he was one of the co-founders of the ANC’s Youth League with Nelson Mandela and Walter Sisulu. That same year, he became the group’s first National Secretary and five years later in1948 he became one of the members of the National Executive.

In 1955, when Sisulu was banned by the South African Government, he took his position as the Secretary-General of the ANC and three years later in 1958, he became the ANC’s, Deputy President. Shortly after, he was banned for five years by the government. This, in turn, led to his relocation to Muswell Hill, London where he was tasked for the activities of the opposition towards the apartheid.

Following the death of Chief Albert Lutuli who was then the ANC’s president, Tambo became Acting President in 1967.

Under his administration, Oliver Tambo was named by the Truth and Reconciliation Commission (TRC) who gave the green sign for the orchestrated attack of the 1983 Church Street bombing. The bombing took place on May 20, 1983, with a casualty count of 217 people and the death of 19 civilians. The blast was said to be executed by the Umkhonto we Sizwe (MK), a special operations unit by the ANC led by Aboobaker Ismail.

Tambo managed to return to his homeland in 1990 when newly appointed South African President F.W. de Klerk lifted the ban against the ANC. A year after his return in 1991, he relinquished his position as president to Nelson Mandela and became the group’s chairman which he executed until his death three years later in 1994.