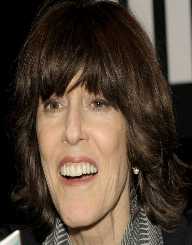 Nora Ephron was born on May 19, 1941. She was an American essayist, journalist, novelist, blogger, and screenwriter. She was also a director and producer. She is famously known for the romantic comedies that she wrote including ‘When Harry Met Sally’ and ‘Sleepless in Seattle' among others. She began her career as a journalist for the New York Post. Her screenwriting career started when she wrote the script ‘Silkwood.’ She also started her filmmaking career with the film ‘This is My Life.’ She achieved a lot in her career before her death on June 26, 2012.

Nora Ephron was born on May 19, 1941, in New York. She was born to Henry Ephron and Phoebe Wolkind Ephron who were noted playwrights and screenwriters. She was brought up alongside three sisters, Delia, Amy, and Hallie. Her sisters Amy and Delia are screenwriters while Hallie is a journalist, novelist and book reviewer. Nora attended Beverly Hills High School where she graduated from in 1958. In 1962, she graduated from Wellesley College in Wellesley, Massachusetts with a Bachelor’s Degree in political science. She then took up a job as an intern in the White House.

After her internship at the White House, Nora Ephron started working as a reporter for the New York Post. She became a well-known writer with the New York Post after she gave news in 1966 that singer Bob Dylan had married Sara Lownds in a private ceremony. She became successful with her articles in the New York Post that she was writing a column on women’s issues for Esquire. She also wrote about topics and people who interested the women. During the 1970s most of her articles focussed on food, intimacy and the happening in New York City. These articles were collected and published in ‘Wallflower at the Orgy’ and ‘Crazy Salad.’ Her article ‘A Few Words About Breasts’ established her as an essayist.

In 1983, Nora Ephron wrote the screenplay for the drama ‘Silkwood.’ The film led her to get an Academy nomination in the category of Best Screenplay. In 1986, she wrote the screenplay for ‘Harry Met Sally’ which starred Billy Crystal and Meg Ryan. The film earned her an Oscar nomination. In 1992, she directed her first film ‘This is My Family.’ In 1993, she wrote and directed the romantic comedy ‘Sleepless in Seattle’ which starred Meg Ryan and Tom Hanks. The film earned her a box office success worth over $120 million.

In 1998, Nora Ephron directed the film ‘You’ve Got Mail.’ The screenplay was written by her and her sister Delia based on the play ‘Parfumerie’ by Miklos Laszlo. In 2005, she directed the movie ‘Bewitched’ which was not a success. In 2006, she went back to essay writing and released ‘I Feel Bad about My Neck: And Other Thoughts on Being a Woman.’ In 2009, she directed the comedy ‘Julie & Julia’ which starred Meryl Streep and Amy Adams.

In 1984, Nora Ephron received the BAFTA Awards for the category Best Original Screenplay for ‘When Harry Met Sally’. In 1994, she won the Women in Film Crystal Award, Crystal Award for ‘Sleepless in Seattle.’ In 2003, she won the Writers Guild of America Awards for the category Ian McLellan Hunter Award for ‘You’ve Got Mail.’  In 2009, she received the Casting Society of America Golden Apple Award for ‘Julie & Julia.’

In 1967, Nora Ephron married writer Dan Greenburg, but they separated in 1976. In 1976, she married journalist Carl Bernstein with whom she had two children, Jacob and Max. They, however, separated in 1980. In 1987, she married screenwriter Nicholas Pileggi with whom she remained with until her death. She died on June 26, 2012, of Pneumonia resulting from acute myeloid leukemia.