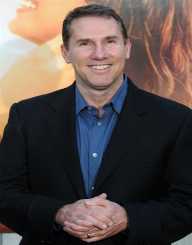 Nicholas Charles Sparks was born on 31st December 1965, to Patrick and Jill Sparks. He was born in Omaha, Nebraska, in the United States. Sparks was the middle child, with an older brother, and a younger sister. His father was a businessman, his mother an optometrist’s assistant. The family had various moves due to Sparks’ father doing graduate studies, first at the University of Minnesota, then at the University of Southern California. His father became a professor of business at California State University in Sacramento in 1974.

Nicholas Sparks studied at Bella Vista High School, and he graduated in 1984. He received a sports scholarship to the University of Notre Dame which he accepted, and he studied business finance.

Nicholas Sparks had written two novels by 1989, but he couldn’t find a publisher. He worked in various roles over the next three years while writing. He co-wrote a book that was released in 1990, called, Wokini: A Lakota Journey to Happiness and Self-Understanding. The book sold 50,000 copies in its first year.

In 1992, Sparks moved into selling pharmaceuticals. He was transferred to Washington, D.C. in 1993. During this time, he wrote The Notebook. Nicholas Sparks submitted the manuscript, but it wasn’t discovered for another two years. A literary agent, Theresa Park, found the manuscript and offered to represent him.

In October 1995,    Nicholas Sparks was able to secure one million-dollar advance for The Notebook from Time Warner Book Group. The book was released in October 1996 and immediately went on to the New York Times best-seller list.

In 1989, Nicholas Sparks married Cathy. The couple had five children, but they divorced in 2015.

Nicholas Sparks donated $9,000,000 for a new all-weather track to New Bern High School. He also contributes to the Creative Writing Program at the University of Notre Dame by funding scholarships and internships.