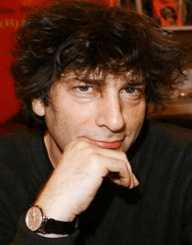 Neil Richard Gaiman, one of the most prolific authors of our generation, is an English writer of short fictions, comic books, novels, films, audio theaters and graphic novels. In his early years, he was captivated by the fantasy world of novels set in a background of distant fairyland. His passion for writing started blooming with his love affair with the fantasy world of novels. It is no wonder that later on, he became one of the most acclaimed writers of marvelous imaginative stories.

Neil Richard MacKinnon Gaiman was born to businessman David Bernard Gaiman and Sheila Gaiman, a pharmacist by profession, on November 10, 1960. He was born in the town of Portchester, Hampshire, England. Claire and Lizzy were his two younger sisters.

He moved to the West Sussex Town of East Grinstead along with his family in 1965. His parents started studying ‘Dianetics’ at the Scientology center of the town. His reading skill was first noticed when he was just four years old. He became a voracious reader by the age of 10 and started winning reading contests and won both the school English Prize and the school reading prize.

C.S. Lewis’s ‘The Chronicles of Narnia,’ Lewis Carroll's ‘Alice’s Adventures in Wonderland’ and J. R. R. Tolkien’s ‘Lord of the Rings’ were among the few fantasy novels responsible for inspiring and motivating Neil to become a future acclaimed writer of such stories himself. He attended several Church of England schools. Fonthill School in East Grinstead, Ardingly College and Whitgift School of Croydon were prominent among them.

In the early 1980s, Neil Gaiman started pursuing a career in journalism. He wrote book reviews and conducted interviews working most of the time for the British Fantasy Society.

In May 1984, Imagine Magazine published his first professional short story, ‘Featherquest,’ which was essentially a fantasy story. In the same year, he authored a book of quotations along with Kim Newman titled ‘Ghastly Beyond Belief’’ and found success too. He concluded his journalism career in 1987.

After finishing his stint in journalism, he started his affair with his first love, writing comic books. From 1987 onwards he wrote several comic books as well as graphic novels. Prominent among them are ‘Violent Cases,’ ‘The Comical Tragedy of Mr. Punch’, ‘Signal to Noise’ etc. DC Comics then appointed him to write a three-part series, ‘Black Orchid’ which was highly appreciated. He was entrusted to rewrite the old comic character of ‘Sandman’ in his next big project with DC comics, and it was an instant hit.

In the 1990s Neil Gaiman’s first full-length novels started to roll out. ‘Good Omens,’ ‘Stardust’ and ‘Neverwhere’ were published in the 1990s and 2001; he came up with ‘American Gods.’ In 2003, he published a novella ‘Coraline’ aimed at the younger generations. He subsequently went on to write ‘Anansi Boys’, one of his most renowned works, in 2005.

Gaiman's other notable publications include ‘The Graveyard Book’ in 2008 and ‘The Ocean at the End of the Lane’ in 2011. His distinguished works include some screenplays for films such as ‘Mirrormask’ (2005) and ‘Beowulf’ (2007). ‘Babylon 5’ and ‘Doctor Who’ are the two screenplays he wrote for T.V. Series.

Mary McGrath, a Scientology student of East Grinstead, became acquainted with Neil Gaiman and as a result of their intimate relationship; they had their first child in 1983. They named him Michael.

They eventually got married in 1985 and were blessed with a girl child, Holly in the same year. A few years down the line, they had another girl child, Madeleine. In 2008, the couple got divorced after a long separation.

Neil Gaiman started dating Amanda Palmer, a singer, and performer, the following year. In 2011, they tied the nuptial knot. Amanda Palmer is a self-proclaimed bisexual person. But they continued to be together and remain married till date, though they have no children.