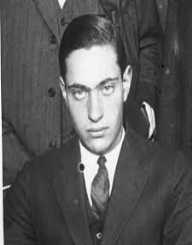 Nathan Leopold was born on November 19, 1904. He was an American educator and author. He is also known as a murderer. He and Richard Loeb worked together to kill Loeb’s cousin, Bobby Franks, who was at the time of his death fourteen years old. These two were obsessed with committing a great crime which would attract the attention of many.

They killed Loeb’s cousin and then later asked for ransom. They were convicted of murder but were not sentenced to the death penalty. Loeb was murdered in prison while Nathan was released on parole in 1958. Nathan died in 1971.

Nathan Leopold was born on November 19, 1904, in Chicago, Illinois in the United States of America. His childhood was not great since he was bullied at school and at the age of twelve he was sexually abused by a governess who was known as Mathilda. He was an intellectual child hence he had fewer friends at school.

He attended Harvard School when his family moved to the neighbourhood of Kenwood in Chicago. He joined college at the age of fifteen. He attended the University of Chicago where he studied ornithology. In 1920, he met Richard Loeb at the institution.

In 1923, Nathan Leopold graduated from the University with honors. Nathan later met Richard again while pursuing their post-graduate studies at the University of Chicago. They became excellent friends and developed a connection with each other. They then developed romantic feelings for each other and became lovers. Richard lured Nathan into criminal activities with the promise of sexual favours. Richard managed to convince Nathan that they could commit the perfect crime together.

The Murder of Bobby Franks

In 1924, Richard and Nathan rented a car and removed its number plates and then drove through the Kenwood neighbourhood in search of a victim. The two decided to kidnap Richard’s fourteen year old cousin, Bobby Franks. They lured Bobby into the car, and once he was inside, Richard hit him on the head several times with a chisel before being gagged and covered with blankets on the car’s back seat. Frank died from the head trauma that he got from being hit with the chisel. They drove to a culvert near Wolf Lake and dropped Bobby’s body. The duo later wrote a ransom note and mailed it to Jacob, Bobby’ father.

Jacob had contacted the police after receiving the ransom note, but Richard and Nathan knew nothing. Bobby’s body was found by a labourer who was working nearby. Jacob identified his son’s body before he could pay the ransom demanded by the duo. Glasses were found near the body, and they were traced back to Nathan Leopold.

Richard and Nathan were later arrested and interrogated before they confessed to having committed the murder. The two laid blame on each other during the time they were in police custody. The two were represented by criminal defence lawyer Clarence Darrow. They pleaded guilty and claimed mental illness to avoid the death penalty. In 1924, they were sentenced to life imprisonment with an added ninety nine years for kidnapping and murder.

In 1936, Richard was murdered by his cellmate, James Day at the Joliet, Illinois Penitentiary after he claimed that Richard had made sexual advances towards him. In 1958, Nathan Leopold was released on parole, and he fled to Puerto Rico. He later became a teacher of mathematics at the University of Puerto Rico. He then published his book on ornithology.

In 1961, Nathan Leopold married Trudi Feldman who was a social worker. Nathan died on August 29, 1971, of a heart attack at the age of sixty seven.