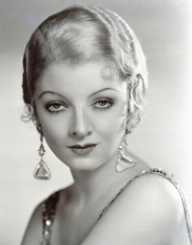 Myrna Loy was an American film, television and stage artist. She was a trained dancer and one of the few stars who made a successful transition from silent movies to the sound era. She was so popular that in 1936 she was named Queen of the movies and Clark Gable the King in a nationwide poll of moviegoers. She was the first Hollywood celebrity to work for the U.S. National Commission for UNESCO. She received an Honorary Academy Award in 1991.

Myrna Adele Williams was born on Aug 02, 1905 in Helena, Montana. Her mother was Adelle Mae who studied music at the American Conservatory of Music Chicago. Her father was David Williams, a rancher. He was also a banker and real estate developer and the youngest man to be elected to the Montana State Legislature. She was raised in Radersburg.

Myrna Loy took dancing lessons and at the age of 12 made her stage debut at Helena’s Marlow Theater. She performed a dance based on ‘The Blue Bird’ from Rose dream Operetta. After her father’s death in 1918, the family moved to California. She was a student of Venice High School. She continued to study dancing in Downtown LA. In 1921 she posed for “Fountain of Education” as the central figure ‘Inspiration’ for her school sculpture teacher Harry Fielding Winebrenner.

Myrna Loy left school at the age of 18 to work at Grauman’s Egyptian Theater. She performed in musical sequences that served as prologues to the feature film. She was noticed by Rudolph Valentine and was hired as an extra for Pretty Ladies (1925) with Joan Crawford. She had a small role What Price Beauty? (1925) and this led her to sign a contract with Warner Bros.

Her surname was changed from Williams to Loy. Myrna Loy played exotic roles and as a vamp in many films from 1926 to 1932 like Across the Pacific,  The Black Watch, The Desert Song, Thirteen Women and The Mask of Fu Manchu. She also worked in musicals and was popular. However, her career plummeted when the musical era ended.

Recognition as a Star

Myrna Loy appeared in Manhattan Melodrama with Clark Gable and William Powell. She was cast as Nora Charles in The Thin Man in 1934. This film was one of the year’s biggest hits and was nominated for The Academy Award for Best Film. Her comedic skills were highly appreciated, and she went on to become a favorite pair with her co-star William Powell. They appeared together in 14 films.

The two films Manhattan Melodrama and The Thin Man were a turning point in her career. Myrna Loy was then cast in important pictures with actors like Clark Gable, Spencer Tracy, and William Powell. She was highly regarded for her romantic comedies and was cast in lead female roles.
With the outbreak of WWII, she abandoned her acting career and became associated with the Red Cross. She also helped run a Naval Auxiliary Canteen.

Myrna Loy later resumed acting and appeared in many films till 1950. Her work now became sporadic, and then she was cast in maternal/heroic characters. She appeared in television movies in the 70’s and episodes in the TV series The Virginian and Columbo. Her last film was Sidney Lumet’s Tell me What you Want(1980).

Myrna Loy was Co-Chairman of the Advisory Council of the National Committee against Discrimination in Housing. She was the first Hollywood celebrity to become a member of U.S. National Commission for UNESCO. She was the founder member of the American Place Theater, a nonprofit theater to help new writers. She championed the rights of black actors and characters to be portrayed with dignity.

Her autobiography Myrna Loy: Being & Becoming was published in 1987.

Myrna Loy received the Lifetime Achievement Award from the Kennedy Center in 1988.

In 1991 Myrna Loy received the Academic Honorary Award for her Career Achievement.

A cast of her handprint and her signature are on the sidewalk in front of Theater 80, on St Marks place in New York City.

Myrna Loy was married and divorced four times. She had no children.

Myrna Loy died on Dec 14, 1993, at Lennox Hill hospital in Manhattan. She was cremated in New York and her ashes interred in Forestvale Cemetery in Helena, Montana.