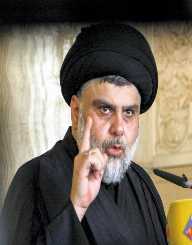 Muqtada al-Sadr is a prominent military leader who rose to fame by leading the Mahdi Army against the US troops’ occupation in Iraq.

Born as the fourth son of Ayatollah Mohammad Sadeq al-Sadr on August 4, 1974, he came from a lineage of well-respected men. Al-Sadr’s father was also a prominent figure in the Shi’a Islamic community and was allegedly murdered by Saddam Hussein’s administration, along with his two other sons.

Al-Sadr took one of Muhammad Baqir al-Sadr’s daughters for his wife of which the wedding took place in 1994. The couple has no children together.

Despite not holding any military roles, Al-Sadr’s influence is widely sought after most especially after the fall of Saddam Hussein’s regiment in 2003. He even stated on one occasion that he sought to gain an Islamic democracy.

Shortly after Hussein’s fall from the US troops, he organized a political movement as backed by his supporters and even formed the Mahdi Army, the military aspect of his supporters. The Mahdi Army constantly came in violent contact with the US Coalition forces hence people claiming that al-Sadr is a radical cleric and Anti-American.

One of his strongest supporters are from Baghdad, the class of people from the Shi’a and came to view as a symbol of resistance to foreign forces.

Al-Sadr is also widely suspected to be involved in a number of assassinations, as executed by his Mahdi Army, the death squad. In 2003, his name often came up in suspicion in regards to the murder of the Grand Ayatollah Abdul-Majid al-Khoei in a mosque in Najaf, the bombing of the house of Muhammad Saeed al-Hakim, as well as the ordering the hit of a number of high-ranking Shi’ite Clergy in the same year.