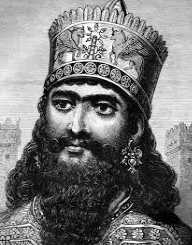 Nebuchadnezzar II is a royal character from the civilization of ancient Mesopotamia. He was the longest-serving king of the Neo-Babylonian Kingdom. He was the eldest son of Nabopolassar, a Chaldean chief. His father served the Neo-Assyrian Empire in the capacity of an officer. Nabopolassar revolted against the Assyrian Monarchy and declared himself as the King of Babylon in 620 B.C. Born around 630 B.C.; Nebuchadnezzar II found first mention in the books of history around 607 B.C.

At that time, he was already a crown prince. He then led an army contingent in an expedition against the Assyrians. The journey was carried out in the mountains of Northern Syria. In 606-605 B.C. he took over as the commander-in-chief of their Chaldean Empire. In the absence of his father, Nebuchadnezzar II successfully conquered Syria and Phoenicia. At that time, the Assyrians and Egyptians ruled these provinces. He engaged them in a battle famously called the Battle of Carchemish. He defeated Egyptian King Pharaoh Necho II in that battle. The regions of Syria and Phoenicia thus came under the rule of Babylon.

ASCENSION TO THE CROWN

Nebuchadnezzar's father passed away in 605 B.C. After that, he succeeded his father to the throne of Babylon. In the initial days of his reign, he was preoccupied with the task of protecting the northern and eastern border of his kingdom. He also successfully thwarted a small but severe uprising in Babylon itself. He was in continuous pursuit of expansion of his empire. Hence, he always remained engaged in different battles from 594 to 587 B.C. He defeated a rejuvenated King Zedekiah of Judah, who assembled many small states under his control.

By 587 B.C. Nebuchadnezzar II conquered Jerusalem, the capital city of King Zedekiah. He was extremely keen to expand the horizon of his kingdom. His dream came true when he successfully secured the allegiance of countries like Syria and Palestine. The rulers of important cities like Damascus, Judah, Sidon, and Tyre also followed suit soon.

Nebuchadnezzar II made the Neo-Babylonian Empire, one of the largest and powerful kingdoms. In addition to that, he also built some tremendous architectural marvels during his rule. He renovated and rebuilt the royal palace. He also incorporated a public museum and the famed hanging garden of Babylon in it. The municipal museum is the first such museum of our universe.

The hanging garden of Babylon had also found a place among the original Seven Wonders of the World. He has also built many temples, a bridge over the river Euphrates, a grand processional boulevard and the gateway called the Ishtar Gate. He had also decorated all these architectural marvels with expensive, glittering stone slabs.

A MAJOR FIGURE IN THE BIBLE

In the Old Testament of the Bible, the name of Nebuchadnezzar II appears frequently. The Old Testament Book of Daniel contains chronicles of his exploits. In the Book of Jeremiah, he was often referred to as the ‘Destroyer of Nations.’

Nebuchadnezzar II was unable to leave any strong successor. He passed away around 562 B.C. His son Amel-Marduk succeeded him. Amel-Marduk was later overthrown by an outsider only two years into his ascension. Family conflicts marred the last years of Nebuchadnezzar II. He is also said to have suffered a seven-year-long period of insanity. During this phase of his life, he led an ignominious life like an animal.